NEW YORK — It is with the greatest sadness that we share the news that our comrade, friend, and past NLG President Michael Ratner died yesterday afternoon at the age of 72. Michael was a true revolutionary lawyer.  He embodied the spirit of the Guild’s founders who believed that the law could and must be used to protect those dissidents and revolutionaries most despised and persecuted by governments worldwide—including our own. 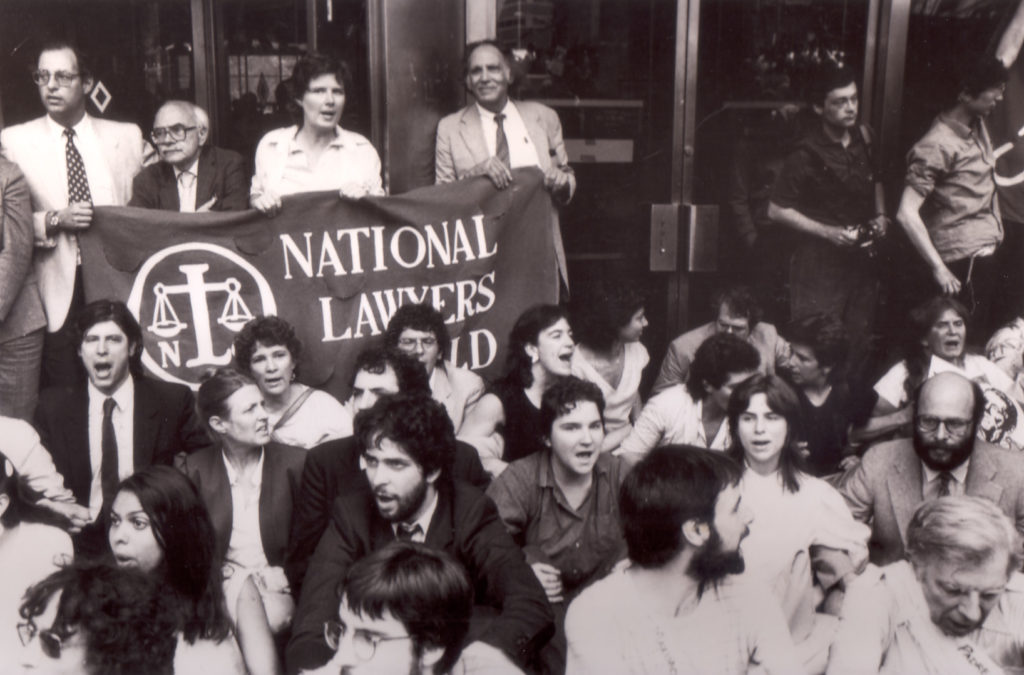 Michael Ratner (second row, far right) protests U.S. aid to the Contras in Nicaragua at a sit-in organized by the NLG-NYC Chapter in front of 26 Federal Plaza in Downtown Manhattan, 1984 (Photo: John Snow).

First introduced to the National Lawyers Guild (NLG) at Columbia Law School, the longtime member and 1995 awardee of the NLG-NYC Chapter took part in the historic 1968 Columbia University protests along with fellow Guild students Daniel Greenberg, Margaret Kunstler-Ratner, Gus Reichbach, and Eleanor Stein.  It was there that he met Guild attorneys including Arthur Kinoy, William Kuntsler, Bill Schaap, Mary Kaufmann, Ralph Shapiro and others in what became the birth of the NYC-NLG Mass Defense Committee.

As President of the Guild in the early 80s, Michael inspired the organization to challenge U.S. interventionism in Central America and the Caribbean through groundbreaking litigation and war crimes tribunals—using international law to challenge the mining of Nicaragua’s harbors, U.S. military support for the Contras in Nicaragua, death squads in El Salvador, the invasion of Grenada. Because of Michael’s leadership of the Guild and the Center for Constitutional Rights, US imperialism was exposed and undermined, and an anti-imperialist movement gained strength and legitimacy.

Michael had the gift of turning an urgent problem into a meaningful lawsuit, using it to pursue torturers and human rights abusers at home and abroad. He and NLG member Jules Lobel litigated a series of historic cases representing members of Congress in challenges to executive war-making. He represented solidarity activists and fought in domestic and international legal forums for the victims of U.S. intervention in Central America, to end the illegal U.S. blockade of Cuba, and for independence for Puerto Rico. Additional victories include gaining freedom for HIV+ Haitians held at Guantánamo Bay in the 1990s and forging the legal challenge to the Bush Administration’s post-9/11 indefinite detention of detainees at Guantánamo.

Most recently, he had been representing WikiLeaks leader Julian Assange and advocating on behalf of whistleblowers Chelsea Manning and Jeremy Hammond. For more than a decade, he also hosted the weekly Pacifica Radio program, Law and Disorder, with fellow NLG members Michael Smith and Heidi Boghosian.

“Michael’s leadership, legal acumen and personal courage provided inspiration for several generations of Guild lawyers and law students. Michael leavened his brilliant mind and his creative legal skills with love and humor, and an abundant energy. His work, his laugh, his irony and his enduring belief in the revolutionary spirit will live on,” said fellow past NLG President Barbara Dudley.