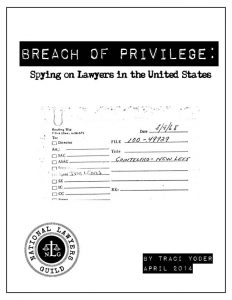 Breach of Privilege: Spying on Lawyers in the United States (2014) brings to light the government’s long history of covert surveillance of attorneys and their activist clients.

In Breach of Privilege: Spying on Lawyers in the United States, NLG Senior Researcher Traci Yoder gives a comprehensive analysis of covert government spying on the legal profession and its detrimental impact on the attorney-client privilege. A resource for scholars, lawyers, and activists, the report opens with the Guild’s own story of surveillance, outlining the tactics developed to undermine zealous lawyering. As Yoder demonstrates, these actions against the Guild marked the precursor to J. Edgar Hoover’s notorious COINTELPRO, which NLG members later helped expose during the Church Committee hearings of 1975-76.