At the University of Chicago Law School, just months after the Edmund Burke debacle earlier this year, students members of the Federalist Society decided to honor Trump’s Solicitor General Noel Francisco. Francisco’s visit was following his cringe worthy oral arguments before the Supreme Court to defend the Muslim Ban. He struggled to indicate that Trump’s Muslim Ban was an informed and deliberately protective policy, rather than the animus-based and xenophobic mess that unfurled in airports across the country. In a lesson on how not to represent your client, Francisco uttered his last statement, “Islam is a Great Country,” indicating the level of precision and knowledge of the policy and legal decisions made within the administration.

The Federalist Society celebrated Francisco by awarding the Lee Otis Award for Public Service. Lee Otis is an alum, and founder of the Federalist Society at the University of Chicago. During the event’s introduction she spoke of how as a student she felt there was a need to represent the views of conservative libertarians, that they were a minority group and remain a minority group. At this point, Professor Otis began to list decades of professors at the Law School that precisely align with and espouse the views she finds so lacking within the field. As Otis spoke on the need for smaller government, at least four plainclothes bodyguards for Francisco were noted in the front and back of the courtroom, presumably paid for with federal funds. Twice Otis noted how embarrassing it is that the Federalist Society’s award is named for her. Students at the University of Chicago agree; we are also embarrassed by her attendance at the law school.

Prior to the event, students from the National Lawyers Guild worked to advertise the event to their fellow students: 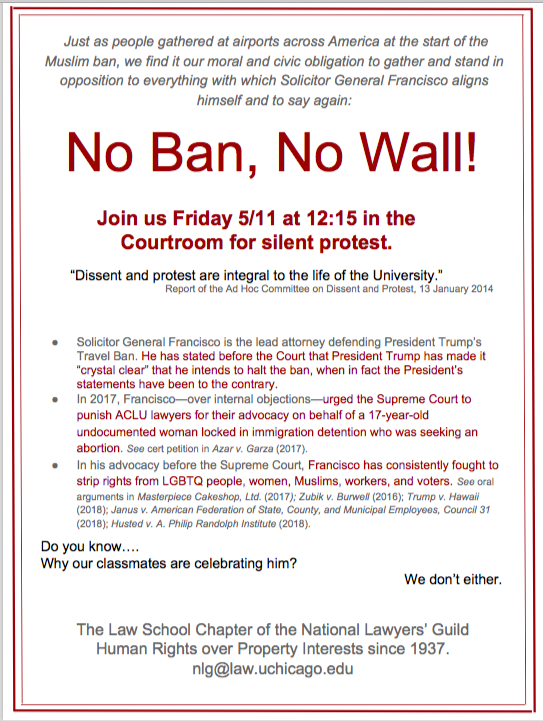 Just two weeks before, the University of Chicago NLG chapter was featured by the law school for winning the first annual pro bono student organization award. The NLG continued their good works in the school, lining the hall to offer informative brochures to contextualize the event for attendees, and handing one to Francisco himself as he entered the corridor. 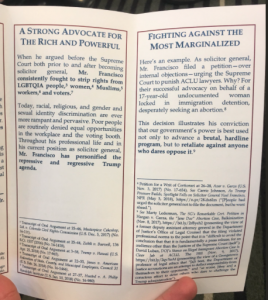 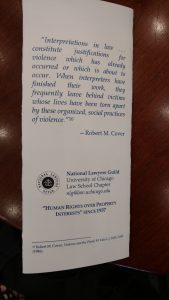 At the entrance, students held posters which greeted the guest speakers. Francisco spoke to the Muslim woman holding a poster by the door which read “A Complete and Total SHUTDOWN of Francisco until we figure out what is going on.”

He tried an exchange with her,

“How are you doing?”
“Disappointed by your presence here in the law school.”

Driving the student dissatisfaction were the events of the prior quarter. The Edmund Burke society, a conservative “debate” society existing at the law school for over two decades, released a whip sheet that finally caught the attention of the student body. Though the whip sheet comparing immigrants to literal trash was particularly notable, this was just one in a series which can be found here. 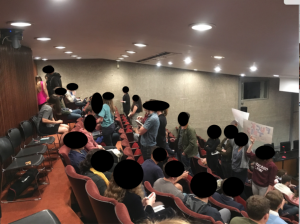 The Chairman of the Burke Society is now the new President of the Federalist Society, an unsurprising development given the almost complete overlap between these sets of student organizations. Other students saw this awards ceremony as another attack on the same targets: undocumented, Muslim, immigrant and LGBTQIA people who suffer as a result of Francisco’s insistence on defending the indefensible. However, the Federalist Society wanted to learn his tactics and normalize his advocacy. Upon the introduction of Francisco to the audience, approximately half of the students in the courtroom stood to turn their backs. Harried law school administrators asked students to lower their posters lest they obstruct the views of the audience. Some explained that they posed no obstruction, and remained standing.

Students had also prepared a card to show they were in compliance with University policy: 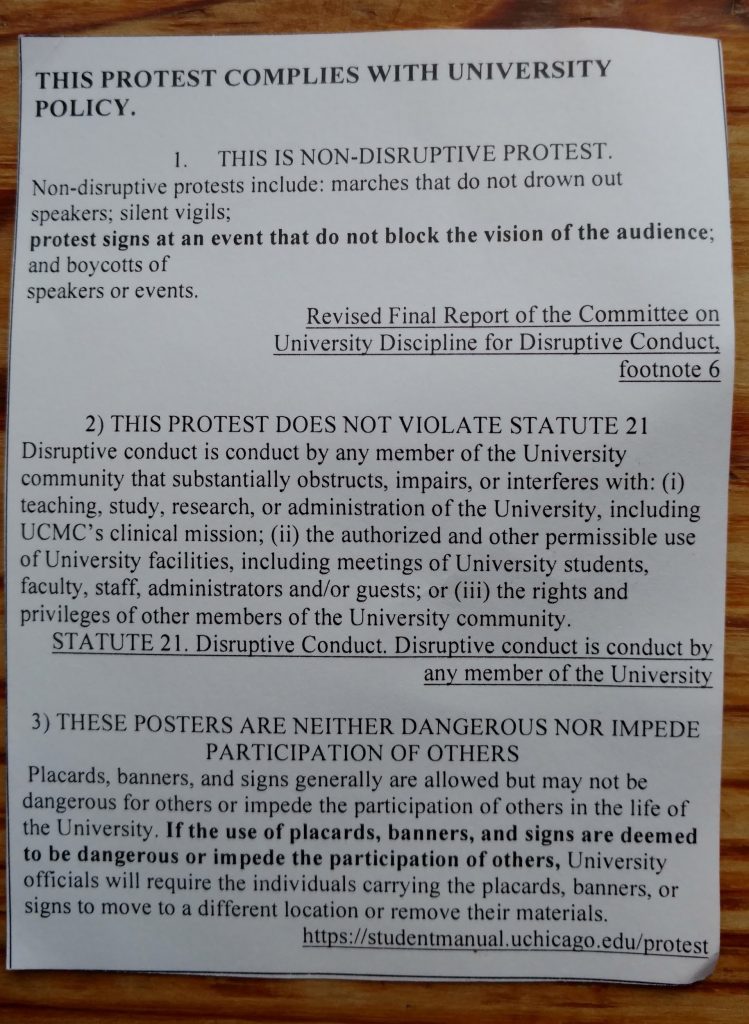 The audience was permitted to ask questions of the speaker via pre-submitted index cards. For a University obsessed with “Free Expression,” it is surprising that every question was filtered by the moderator Professor Todd Henderson. The remarks by Professors Otis and Henderson praised the federal official for his magnanimity in the face of the clear opposition before him. Likely this was one of the few venues in which he sees the faces of those who object to his work, from which even his bodyguards could not protect him.

Some students walked out of the talk, which consisted largely of anecdotes from his days at the Law School (Did you know Francisco once dropped a class? He also studied in the library). Among the most substantive praises of his actions were celebrations of his confidence when he casually dismissed opportunities to further develop his thinking as a law student.

Protest posters were used again to alter the school’s homogeneous string of white man portraits, helping re-contextualize the artwork in the law school and make it relevant to the needs of our time. 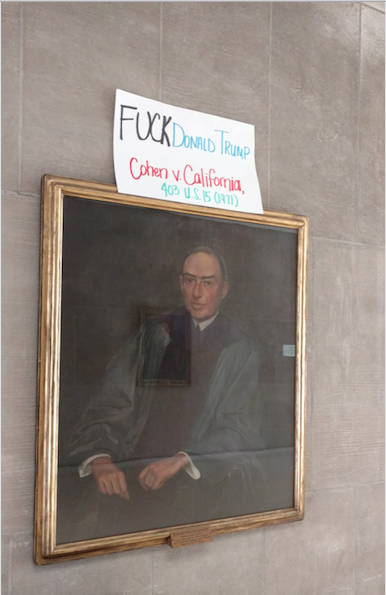 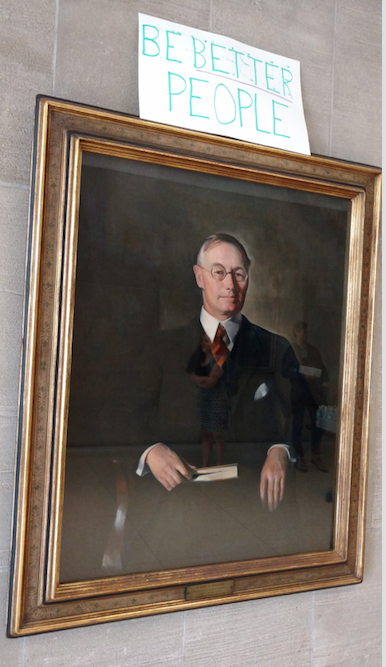 When the remaining attendees entered the courtroom hallway to pick up their lunches, they had the welcome of the artwork, with ambiance provided by the music of Nipsey Hussle’s FDT. Remaining brochures about the event accompanied each lunch box. As the main speaker exited with the esteemed Dean of the Law school , the students—with no prior planning—decided to escort them through the school hallway. Students trailed behind the prominent lawyers while the lyrics of Nipsey’s song captured our spirit:

“We the youth. We the people of this country. We got a voice too. We will be seen, and we will be heard.”

Eventually, the two officials and bodyguards entered the Dean’s corridor, beyond the reach of students. It was a funeral procession for old ideas and a broken world that the law students are committed to defying. What remained of the Federalist Society’s student members convened around the leftover food from the American Constitution Society’s talk that was concurrently held on pro bono work the world actually needs.