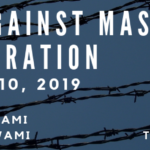 We are publishing this piece as part of the NLG annual student Week Against Mass Incarceration. In 2019, we are highlighting the connections between the exponential increase of incarcerated people and the 40-year War on Drugs.  By Lisa Drapkin, NLG Director of Membership The cultural narrative around drug use in the US is constantly shifting, […]

High Crimes: Strategies to Further Marijuana Legalization Initiatives (2013) In November 2012, Washington and Colorado became the first states—and the first jurisdictions in the world—to legalize the possession, use, and regulated distribution of marijuana. Although Attorney General Eric Holder promised in March 2013 to announce a Department of Justice policy to address the state initiatives, […]