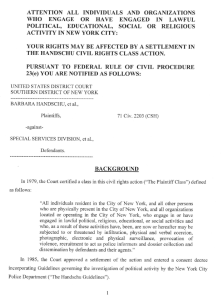 Responding to public outrage at the disclosure of a “Muslim Surveillance Program” by the New York City Police Department (NYPD), the NYPD agreed in court filings in early January to strengthen oversight of terrorism investigations thorough a series of amendments to the longstanding “Handschu” political surveillance guidelines. The court-ordered guidelines are rules to protect exercise of political, religious and other First Amendment activity when the NYPD seeks to investigate unlawful activity. Also known as the New York “Red Squad” case, Handschu v. Special Services Division originated from NYPD infiltration of the Black Panther Party and disclosure of a police spy unit founded in 1903 which infiltrated political groups and amassed hundreds of thousands of files on legal First Amendment activities of New Yorkers. In 1986, the NYPD adopted court-ordered guidelines in settlement of the Handschu class-action, and following the 9/11 attacks on the World Trade Center, the federal court “modified” the guidelines at the request of the NYPD in 2003. Handschu class counsel have been enforcing NYPD violations of the “relaxed” spying rules ever since, as the NYPD continued to push the envelope against communities including anti-war and #BlackLivesMatter demonstrators.

The January agreement came in a Handschu enforcement motion, and in Raza v. City of New York, a 2013 suit brought by Muslim community members, following revelations by an Associated Press investigative team in late 2011 that uncovered a NYPD “Muslim Surveillance Program,” that subjected entire neighborhoods to surveillance and scrutiny, including dispatching undercover officers as part of a human mapping program and using informants known as “mosque crawlers” to monitor sermons. The AP series (ap.org/nypd) reported that hundreds of mosques and Muslim student groups were investigated and dozens were infiltrated. In a Handschu case deposition in 2012, the AP revealed that the Chief of the NYPD Demographics Unit testified that during his tenure which began in 2006, none of the information from the unit had been sufficient to trigger an investigation.

The “Joint Settlement Process” in the two lawsuits resulting in the January agreement is subject to approval by the federal judge who supervises the Handschu decree. A “Fairness Hearing” will be held in Manhattan federal court on April 19, 2016. A Hearing Notice available at www.nlgnyc.org and www.nyclu.org outlines how to file comment with the court about proposed Handschu guidelines amendments, along with an explanation of the proposals. The proposal includes:

A clarification that race, religion and ethnicity should not be factors in motivating investigations which should be built on factual information;

Presumptive time limits on investigations (none had existed before);