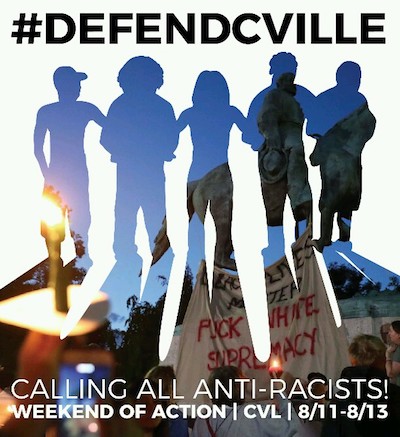 NLG Mobilizes Legal Support Ahead of “Unite the Right” Counter-Protests

CHARLOTTESVILLE, VA—The National Lawyers Guild (NLG) is coordinating legal support in anticipation of counter-protests to the white supremacist “Unite the Right Free Speech Rally” to take place tomorrow in Charlottesville, VA. White nationalist hate groups including the Ku Klux Klan, League of the South and the neo-Nazi National Socialist Movement are backing the event. “Alt-right” founder Richard Spencer is a headlining speaker and KKK leader David Duke has endorsed the event. Organizers are calling for this to be the largest rally in “alt-right” history in response to the “crack[ing] down on the First Amendment rights of conservatives and right wing activists,” according the Facebook event page description.

On July 8, the Ku Klux Klan held a rally in Charlottesville in objection to the city’s removal of a statue of Confederate general Robert E. Lee from Emancipation Park, formerly Lee Park. Thousands of community members turned out in a display of resistance to white supremacy, outnumbering the KKK 50-to-1. They were then met with chemical weapons, excessive force, and subjected to arrest by police. Twenty-three counter-protesters were arrested.

On Saturday, anti-racists and others from across the region are planning to demonstrate in support of local organizers holding counter-protests, employing rallying cries #DefendCville and #NoNewKKK. In preparation for mass arrests, the Central VA and DC Chapters of the NLG are organizing licensed Virginia attorney volunteers to provide counter-protesters with legal representation and potential civil rights suits. In addition, NLG members are coordinating Legal Observers, a jail support hotline for arrestees, and procedures to monitor safety and detention conditions at the local jail, which may not be adequately equipped to handle such large numbers of arrestees. The Virginia National Guard is on alert stating yesterday it would “rapidly respond and provide assistance to local law enforcement if needed to keep citizens safe.”

“Based on our recent experiences with law enforcement and the city, ​we believe that there is an extremely high likelihood that community members who may decide to demonstrate against hate, racism, and fascism, will be targeted—not only by the alt-right, but also by law enforcement. Our local jail has already announced that it is cancelling all visiting hours this weekend in anticipation of mass arrests, so we are preparing for arrest numbers that may be unprecedented in Charlottesville,” says Chair of Central VA Chapter of the NLG, Andrew Mahler.

As an anti-racist, anti-oppressive organization, the NLG categorically refuses to provide legal support to white supremacists.