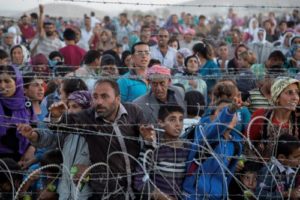 y Al-Mourabitoun in Bamako, Mali; the November 23rd terrorist attack by Boko Haram in Maiduguri, Nigeria; and all other places affected by terrorist or imperialist violence.

ARC, TUPOCC, and NIPNLG also stand in solidarity with Syrian and Iraqi refugees who seek protection in the United States, and oppose recent actions by Congress and states to block these refugees from settling in this country. Since November 13th, the U.S. House of Representatives has passed a bill that would create an even more onerous vetting procedure for Syrian and Iraqi refugees. Governors of 28 states have publicly opposed resettlement of Syrian refugees in their states, often through (legally unenforceable) executive orders. Republican governors have demanded that President Obama suspend a Syrian refugee program completely. A political candidate has publicly expressed support for heightened tracking and surveillance of Muslim-Americans.

This anti-Muslim and anti-Arab frenzy is illogical, morally unacceptable, and illegal. Syrian refugees are admitted to the U.S. in disproportionately low numbers compared to the scale of the crisis, and already must endure a time-consuming screening process. Syrian and Iraqi refugees need to resettle in the U.S. because of instability and violence in their home countries. The United States directly contributed to these conditions by invading and occupying Iraq, training and arming Syrian rebels, and conducting other military interventions in the region. ARC, TUPOCC, and NIPNLG condemn any action by the U.S., its states, and local communities, to block resettlement of refugees based on the racist and Islamophobic assumption that these refugees present a terrorist threat because of their national origin and/or religious affiliation. Moreover ARC, TUPOCC, and NIPNLG condemn any action by the United States to curb the civil rights and civil liberties of Muslim and Arab-Americans in violation of the civil rights laws and the Fourteenth Amendment of the Constitution.

Throughout American history, the United States has channeled fear into racist domestic policy in moments of international crisis. During World War II, over 100,000 Japanese-Americans were relocated and incarcerated in camps, and Jewish refugees from Germany were denied entry into the U.S. After 9/11, Muslim-Americans and Arab-Americans were, and are, subjected to increased surveillance and state violence. ARC, TUPOCC, and NIPNLG condemn any efforts to repeat history by blocking resettlement of Syrian and Iraqi refugees, or increasing surveillance of Syrian and Iraqi-Americans, due simply to their race, national origin or religion. Such actions are deeply misguided and racially discriminatory.