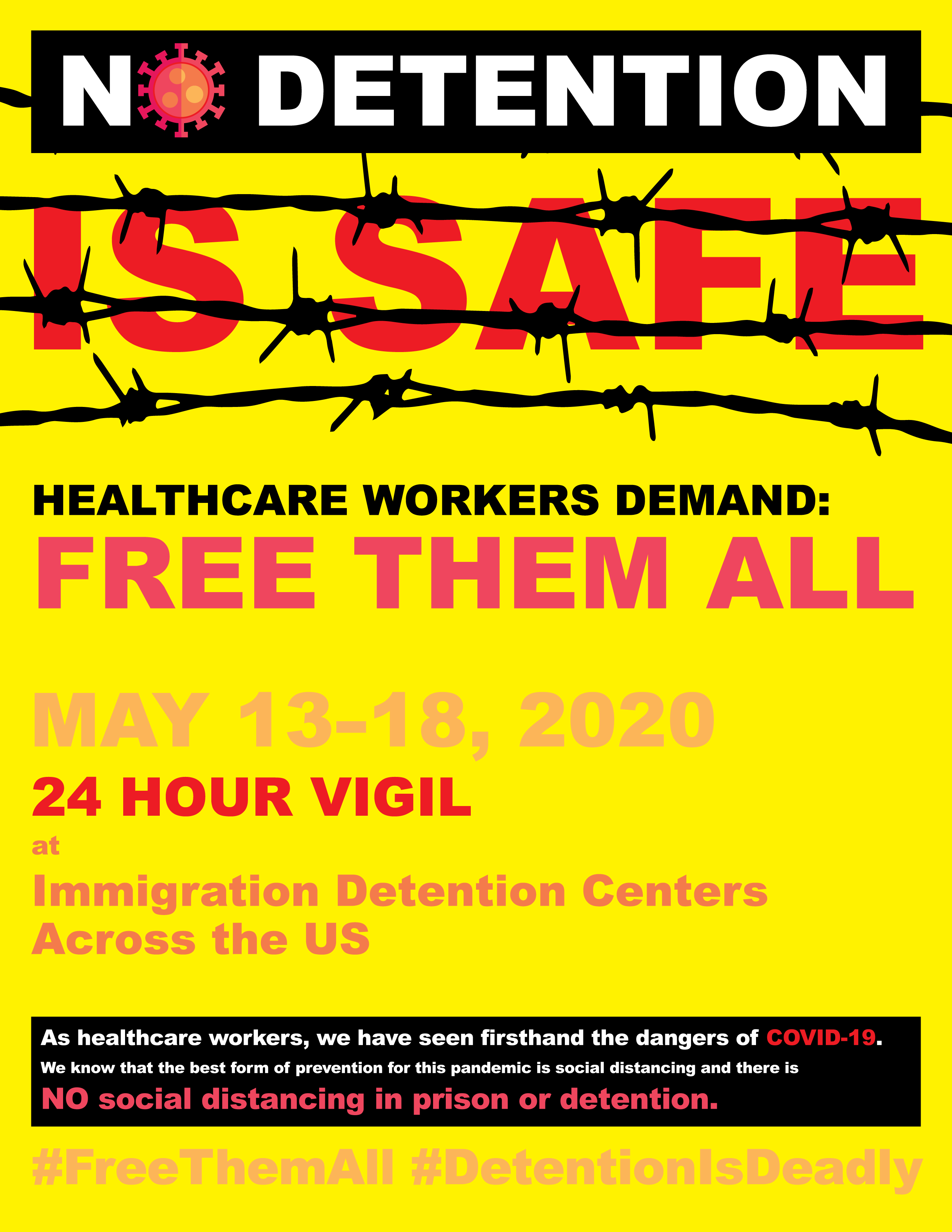 Allies everywhere can participate digitally in the 24-hour vigil at Elizabeth, New Jersey Detention Center that begins on Saturday, 5/16/2020

The Immigration Rights Committee and Prisoners Legal Advocacy Network of the Delaware-New Jersey National Lawyers Guild have endorsed the 24-hour vigil at the Elizabeth Detention Center that begins Saturday, May 16, 2020. The NJ-NLG Mass Defense Committee is providing legal support for the action.

Densely populated ICE detention centers are self-evidently unable to comply with CDC social distancing guidelines or other life-saving public health recommendations, or to afford people inside meaningful opportunities to do so. The approximately 700 confirmed cases of COVID-19 in ICE detention centers are foreseeable results of the medically endangering conditions in ICE facilities. The recent death of a person detained in San Diego, California’s Otay Mesa Detention Center is emblematic of the urgent need for the immediate release of incarcerated individuals.

The inhumane COVID-19 conditions at detention centers like Elizabeth extend beyond facility walls by inciting terror among undocumented individuals who fear that testing positive for the virus could result in public health reporting that might lead to their own detention. Make the Road New Jersey recently released a report, “Essential and Excluded: Immigrants in New Jersey Under COVID-19,” which is based on telephone surveys with more than 200 immigrants living in New Jersey communities. Of the undocumented survey respondents who reported being sick during the outbreak, one in two said they had not seen a doctor. Sixty-four percent of the New Jersey immigrants surveyed reported that they did not seek medical attention because they were worried about immigration enforcement or unfavorable impact on their status.

This week healthcare workers across the country are hosting a series of vigils to advocate for the release of all people from immigration detention as part of the #FreeThemAll #DetentionIsDeadly campaign.  Campaign vigils are planned in New Jersey, Massachusetts, Maryland, Texas, Michigan, and California.

This weekend’s #FreeThemAll #DetentionIsDeadly vigil at New Jersey’s Elizabeth Detention Center demands the immediate release of individuals from that facility, where 18 individuals have tested positive for COVID-19. The vigil also stands in solidarity with the families of those confined in Elizabeth, who lack means to determine the health status of their loved ones due to the detention center’s suspension of visitation and telephone communications.

Emeka Iloegbu is one of the vigil’s organizers. Emeka is a Clinical Laboratory Scientist in the Hematology section of New York Presbyterian Hospital at Columbia University. He holds a Master’s Degree in Public Health from the Icahn School of Medicine at Mount Sinai and a Master’s of Science in Forced Migration from Columbia University. “For the last three years, I have worked on a number of projects that focused on designing and implementing public health assessments and developing healthcare programs in southern Arizona communities that are near the U.S.-Mexico Border. This vigil is my way of challenging the harsh realities that migrants and asylum seekers are facing in this country in these fragile times. This demonstration seeks to build community awareness and solidarity, and to increase public pressure on ICE and detention facility officials to uphold the rights of detained people to humane treatment.”

The 24-hour vigil outside of the Elizabeth, New Jersey Detention Center will begin at 9:00 a.m. on Saturday, May 16, 2020. To observe CDC social distancing guidelines, on-site participants will stand more than six feet apart and wear masks, or remain in their cars. Those who would like to join the on-site vigil can email Emeka Iloegbu at arinze777@gmail.com for location details.

11:00 a.m.:  Organizers will provide an overview of the #FreeThemAll #DetentionIsDeadly campaign and the inhumane COVID-19 conditions at Elizabeth Detention Center.

8:00 p.m. and 11:00 p.m.: Candle lighting ceremony and vigil.  On-site participants will read the names of those who have died in detention.

Throughout the day there will also be other events such as letter writing to detained individuals and reflective activities honoring those who have died in detention. Digital participants can actively participate in these events.

In observance of the Centers for Disease Control’s COVID-19 Mitigation Strategies for Communities, NJ-NLG members are providing 24-hour legal support for the action through telephonic on-call attorney services and digital legal observing for this important event.

Tyler Crawford, the National Lawyers Guild Director of Mass Defense, said, “The 24-hour vigil at the Elizabeth Detention Center is an important reminder of the life and death challenges currently facing incarcerated people. It is also a reminder that we need to continue organizing during the pandemic, and an inspiring example that proves it is possible to do so.”

Stanley Holdorf, the supervising attorney of the Delaware-New Jersey NLG chapter’s Prisoners Legal Advocacy Network, shares this concern for people confined in the state. “At least 41 prisoners incarcerated in New Jersey Department of Corrections facilities have died of complications caused by COVID-19. That is the highest number of state prisoner deaths from COVID-19 in the United States.  The New Jersey Governor issued Executive Order 124 on April 10, 2020 to release state prisoners who are medically vulnerable or nearing their release date. Five weeks later, only an estimated 5% of the New Jersey state prisoners who are eligible for immediate release under Executive Order 124 have been freed. Incarcerated people don’t need political showmanship. They need action. Executive Order 124 is just one more example of government agencies bending to public pressure through hollow initiatives that are not meaningfully enacted. Rather than professing his commitment to humane conditions of confinement during the COVID-19 outbreak, Governor Murphy should take responsibility for the immediate and comprehensive implementation of the Orders he issues. The vigil at Elizabeth Detention Center is an important reminder to government officials that confined people need action, not rhetoric.”