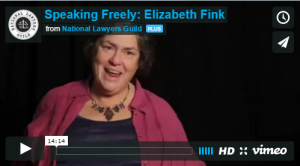 Watch Liz Fink recount her experience as a movement lawyer as part of the NLG’s “Speaking Freely” video history series.

Elizabeth “Liz” Fink (1945-2015) was a “second-generation,” lifelong NLG-NYC member and fierce criminal defense attorney. In this Speaking Freely video, Liz explains how she grew up in the Guild and what led her to become a radical lawyer, ultimately winning a $12 million settlement for the victims of the 1971 Attica prison uprising.

Elizabeth Fink died September 22, 2015. The National Lawyers Guild will forever remember Liz with the utmost admiration and respect. Read more about her remarkable life in The New York Times and The Washington Post.

A memorial was held November 7 at Union Theological Seminary, which was recorded and can be found on our “Liz Fink” channel at vimeo.com/nlg/channels as well as the NLG “Speaking Freely” video history interview (left).

Posted in Guild Notes and tagged Attica, In Memoriam.