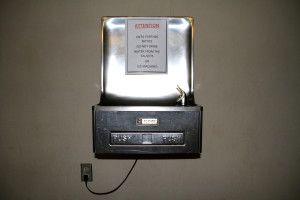 On January 8th, Detroit activists called for a “solidarity road trip” from Detroit to Flint, Michigan to “Arrest Governor Snyder.” That evening, local residents and social justice groups from around the state converged on the front lawn of Flint’s City Hall to demand the investigation and indictment of Governor Rick Snyder over the city’s ongoing lead water contamination crisis.

By the time I arrived with other Detroit Legal Observers, a large crowd and dozens of media crews were there, despite the steady rainfall. Members of We the People of Detroit and Water You Fighting For were holding banners, chanting and delivering flats of water from a distribution truck in between interviews. Next to the street the Detroit Light Brigade lined up to spell out “#ArrestSnyder” with LED lights, while a giant papier-mâché  Snyder head walked through the crowd wearing a black and white striped jumpsuit. The crowd did not become discouraged as it grew dark and the rain beat down harder. Instead, they marched to a nearby overpass to share this message with traffic below and were met with cheering from people in cars along the way.

When we arrived back in the center of town, the rally stopped for more photos before noticing that the building directly behind us was the county jail. We started asking about water conditions inside and discovered that, while no one knew for certain, there was a growing concern among Flint residents that prisoners were not receiving clean water to drink or bathe with.

At the request of Flint organizers over the next few weeks I returned to the Genesse County Jail during visiting hours with prison rights activists and a grassroots media team. Through interviews with family members and people who were recently released, we learned that the Genesse County jail officials were indiscriminately providing bottles of water, on and off, since last October.

Everyone we spoke with confirmed that for the majority of their time inside, they were forced to drink contaminated water from the tap. Many showed skin rashes that they believe came from showering in water with high lead levels. One man who was only in for a week told us that he tried not to drink any water but was forced to when it was mixed into his food. Nearly all the prisoners we spoke with said they had requested but were denied bottled water until mid-January, when they started to receive two to four 12 oz. bottles of water per person a day—barely enough to keep hydrated —especially for pregnant women and people with medical conditions.

Since the Genesse County Sherriff still maintains that tests in the facility show only trace amounts of lead levels we have submitted FOIA requests to confirm those results. In the meantime, Lansing attorney Dan Manville has filed a complaint for injunctive relief to get inmates bottles of water as quickly as possible and is also drafting a lawsuit. Members of the NLG Detroit and Michigan Chapter, the Black Movement Law Project, and law students at the Michigan State University Clinic are working on legal support at the local and national levels.

You can watch an excerpt from an interview with former inmate Jodi Cramer, which aired on Democracy Now! on February 4th at www.democracynow.org/2016/2/4/exclusive_report_how_long_did_flints.  The interview was conducted by Kate Levy, Shanna Merola & Antonio Cosme of the Raiz Up Collective. ■