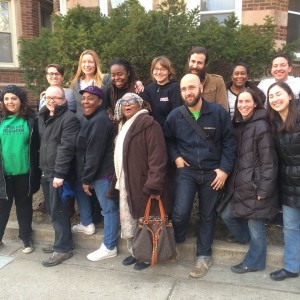 CCBF members (including four NLG members) at their all-day retreat in February.

On any given day, around 500,000 people in the United States are behind bars for one simple yet horrifying reason: they cannot afford bond. In Chicago, a determined group of mothers of pretrial detainees, community activists, and NLG lawyers and legal workers have worked since December 2014 to launch the Chicago Community Bond Fund. CCBF is a nonprofit, all-volunteer organization that posts bond for individuals whose communities have been impacted by structural violence and cannot afford to pay the bonds themselves. Simultaneously, CCBF advocates for the abolition of money bond using public education, advocacy, and long-term relationship building alongside people directly impacted by criminalization and policing.

CCBF emerged from bond fundraising efforts that were directly linked to supporting protesters and the work of NLG-Chicago attorneys defending them. Local activists and legal workers first raised over $30,000 to bond out four activists charged with felonies during protests of the NATO Summit in 2012, a “national special security event” (NSSE) for which NLG-Chicago mobilized considerable legal support. In August 2014, group bond fundraising efforts were revived following an unplanned arrest of five South Side Chicagoans after a vigil for DeSean Pittman, a 17-year-old Black youth who Chicago Police had shot and killed just days before. Activists and NLG members partnered with the mothers of several arrestees to raise nearly $30,000 to bond everyone out of jail. The first was DeSean’s mother, who nearly missed her son’s funeral because her family was unable to afford her bond. The fifth and final arrestee was not released until December 2014. His mother and others recognized that bond funds needed to be immediately available in order to minimize time spent in jail and the resulting harms to education, employment, physical health, and relationships.

Using the strong relationships and successful organizing model developed through these efforts, the group decided to establish a revolving bond fund, and CCBF was born. Using a list of 11 flexible criteria, such as a defendant’s health needs, risk of victimization in jail, and the impact of detention on employment, housing, education, and custodial rights, CCBF now receives requests for assistance several times per week. Over the last three months, CCBF has posted over $47,000 in bond and has gotten five people out of Cook County Jail or off of home confinement. We also took over management of a pre-existing $26,000 bond fund for women survivors of domestic violence facing criminal charges related to their self-defense against their abusers.

CCBF recognizes the minimal impact on a large system that can be made by bonding out individuals, but it nevertheless has a powerful impact on each person we assist. In addition to allowing someone to keep their housing or employment, maintain caretaking responsibilities or treatment, pretrial freedom is also legally strategic. Most defendants are much better able to fight criminal charges when they are doing so from a place of freedom. Importantly, the pressure defendants face to take bad plea deals is drastically reduced when they are no longer considering a conviction in exchange for freedom. It also allows CCBF to share their stories with the broader public as part of our advocacy challenging pretrial detention.

CCBF is one of the country’s few community bond funds. We are grateful to have been in close contact with and to have learned from other bail funds, such as the Brooklyn Community Bond Fund, the Massachusetts Bail Fund, and the Bay Area Anti-Repression Committee. Additionally, we actively connect our work to larger issues of criminal legal system reform and strive to be accountable to grassroots organizing for racial justice. In December 2015, the Movement for Black Lives in Chicago included ending monetary bond as one of six demands for 2016 jointly endorsed by more than 25 organizations. We are also in conversation with policy advocates, systems stakeholders, and firms hoping to do impact litigation around monetary bond in order to share the experiences of our clients and continuously push for the absolute abolition of monetary bond.

For more information or to donate, visit chicagobond.org! ■