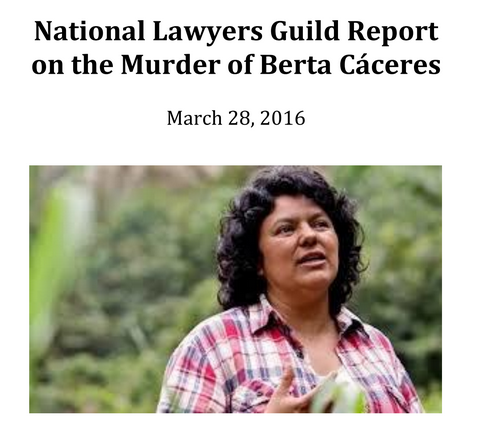 NEW YORK—The National Lawyers Guild (NLG) denounces the March 2 killing of leading indigenous and environmental activist Berta Cáceres and the investigation by Honduran authorities that followed. A March 8-15 NLG delegation to Honduras met with various Honduran and U.S. government officials, community members, and the Cáceres family to probe the circumstances surrounding her murder and the ensuing investigation. It issued its report today.

Cáceres’ family and other groups have condemned irregularities in the investigation, including the government’s refusal to honor requests for an independent autopsy; the initial rush to judgment that the killing was a crime of passion; and the refusal to allow Gustavo Castro Soto, a victim and sole witness who was injured in the attack, to return to his home in Mexico. Neither the NLG nor the family believes that the government that failed to protect Cáceres, and whose legal institutions are notoriously corrupt, can be trusted to find her killer.

Based on the delegation’s findings, the NLG echoes the growing demands for the U.S. to support an independent, impartial, international investigation by the Inter-American Commission on Human Rights that leads to prosecution of both the material and intellectual authors of the murder. The NLG also urges the U.S. to suspend security assistance until Honduras has shown through concrete action and results that it respects human rights, protects human rights defenders, and upholds the rule of law. The NLG also calls for the U.S. to permanently end development aid (including direct aid and funds disbursed through multilateral development banks) that supports projects that were undertaken in violation of the right to free, informed consent of the indigenous people whose territory they affect.

Without urgent, pointed, and effective action by both the United States and the broader international community, which provide funding to the Honduran government, Honduras will likely continue its massive violation of the rights and the lives of its indigenous communities.