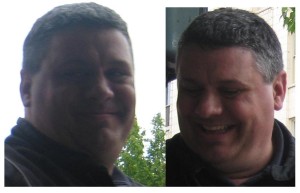 Army infiltrator John Towery over a two-year period beginning in 2006, spied on the antiwar group Port Militarization Resistance (PMR), Students for a Democratic Society, the Industrial Workers of the World, and Iraq Veterans Against the War.

SEATTLE—Several grassroots and legal organizations filed an “amicus” brief Wednesday in support of a widely watched lawsuit challenging the military’s domestic spying against antiwar activists in the Pacific Northwest.

The case Panagacos v. Towery is currently on appeal before the Ninth Circuit and, because of the Army’s strenuous objection to public disclosure of documents, plaintiffs were forced to file their appeal brief last August under seal. The Ninth Circuit has not yet announced a date for oral arguments, but is expected to do so in the next few weeks.

The amicus brief was filed jointly by the National Lawyers Guild, A.J. Muste Institute, Campaign to Bring Mumia Home, Granny Peace Brigade, Iraq Veterans Against the War, Time’s Up!, and War Resisters League. “The accumulative misconduct in this case reflects the national pattern and practices of unconstitutional ‘pre-emptive’ law enforcement,” states the brief. “Permitting the Army, in cooperation with local fusion centers, to monitor, infiltrate and disrupt a local anti-war organization represents a clear violation of the Posse Comitatus Act, and the principles of a democratic society.”

Before the case was summarily dismissed by U.S. District Court Judge Ronald B. Leighton in June 2014, John Towery, the Army infiltrator named in the lawsuit, admitted to working for the Army while spying on nonviolent activists, and his superiors confirm a military/police spying apparatus that equated civil disobedience with terrorism. Public records obtained in 2009 established that over a two-year period beginning in 2006, Towery (under the alias “John Jacob”) spied on the antiwar group Port Militarization Resistance (PMR) as well as several other organizations, including Students for a Democratic Society, the Industrial Workers of the World, and Iraq Veterans Against the War.

“Military and law enforcement officials have admitted to engaging in actions that not only violate our plaintiffs’ constitutional rights, but also violate a century-old law that should protect U.S. civilians from military intrusion,” said Larry Hildes, a National Lawyers Guild attorney who filed the Panagacos lawsuit in 2010. “The military must be held accountable.”

Until last year, Towery and his supervisors had claimed he was working as a civilian during this period and the operation was not directly tied to the Army. However, Towery admitted in a March 28th deposition to routinely being paid by the U.S. Army to gather intelligence and disseminate it to his military superiors as well as to the Washington State Fusion Center (WSFC), a communications hub of  local, state and federal law enforcement. Towery’s information was circulated to police departments in multiple states, and used to disrupt planned protests by preemptively and falsely arresting activists. Towery filed an unsealed response to the Panagacos appeal late last year.

Towery’s supervisor at Joint Base Lewis-McChord, Force Protection Division Chief Thomas Rudd confirmed in an April 1st deposition that Towery was working for the Army when he spied on members of PMR and other groups. In his most recent brief–an unsealed response to the appeal–Rudd further contradicts earlier testimony he provided to Army investigators in 2009. Rudd evades his failure to report Towery’s status as an Army spy and Towery’s integrated role between the Army and civilian law enforcement, admitting to “very limited” training on Posse Comitatus, which prohibits the military from engaging in domestic law enforcement.

Pierce County Sheriff’s Det. Chris Adamson, director of the WSFC’s “Intelligence Group 5” and one of Towery’s supervisors said in a March 26th deposition that he used intelligence from Towery to place activists on a widely disseminated domestic terrorism list used by law enforcement. Adamson had no trouble equating sit-ins and civil disobedience blockades with domestic terrorism “if they were trying to obstruct governmental process” or if “they’re tying up law enforcement resources.”

In addition to Towery, named defendants in the Panagacos case include Towery’s supervisor Thomas Rudd, the U.S. Army, Navy, and Coast Guard, as well as certain officials within its ranks, the City of Olympia and its police department, the City of Tacoma and its police department, Pierce County, and various personnel from those jurisdictions. This is the second time Panagacos has reached the Ninth Circuit. In December 2012, the Court ruled that plaintiffs could proceed to trial and remanded the case to Judge Leighton.