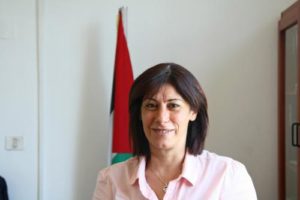 On August 20, 2014, in the midst of its brutal and ongoing assault on the Gaza Strip, Israel escalated its crackdown on Palestinian civil society in the West Bank by giving Jarrar 24 hours to leave Ramallah and relocate to Jericho. Under the order, Jarrar is not allowed to leave Jericho for the next six months absent permission from Israel’s West Bank military commander. Jarrar has refused to sign the order and has defied it by remaining in Ramallah. She has set up a protest tent outside the PLC office in Ramallah where she is living and working until the order is rescinded.

Jarrar was elected to the PLC in 2006 and currently leads the legislative body’s Prisoners Committee. An established and committed human rights activist, she served 12 years as the director of Addameer, a well-known Palestinian prisoners’ rights organization, and continues to sit on its board.

Even before it began its assault on Gaza, Israel began a massive crackdown on Palestinian political activists throughout the West Bank, arresting hundreds, raiding offices, and severely restricting civilian movement. Just last week, the Israeli army made 53 incursions into West Bank communities and arrested 90 Palestinians, including 48 from Jerusalem.

There is little doubt Jarrar’s expulsion is an integral part of Israel’s wider political crackdown. Specifically, the order is based on Israel’s accusation that Jarrar poses a threat to the “general security of the area.” But like other military orders that Israel issues to Palestinians throughout the occupied territories, Jarrar’s order does not specify or explain much of anything, including why Israel considers Jarrar to be “dangerous.” Nevertheless, there is likely a connection between Israel’s desire to banish Jarrar from Ramallah and her vocal criticism of the Palestinian Authority’s “security coordination” with Israel.

Jarrar’s expulsion from Ramallah clearly violates Article 42 of the Fourth Geneva Convention. As an occupying power, Israel cannot intern or otherwise forcibly relocate any Palestinian living under occupation absent a showing of absolute necessity. Israel has made no such showing with regards to Jarrar. Further, the order likely violates Article 49, which prohibits Israel from banning a Palestinian living in the West Bank from the territory.

During NLG’s recent prisoners’ rights delegation to Palestine, which Addameer hosted, NLG members met personally with Jarrar. According to NLG Palestine Subcommittee Co-Chair Andrew Dalack, who participated in the delegation, “Khalida left a lasting impression on all of us. She is a leader not by title alone, but because of her critical analysis, experience, and serious commitment to a unified Palestinian political body. Israel has targeted an effective and popular Palestinian leader in another shamelessly obvious attempt to cripple the Palestinian self-determination movement.”

Showing Israel that Jarrar has international support is critical to helping her remain in Ramallah. NLG calls on its members and other people of conscience to contact the relevant Israeli authorities per the instructions below and demand that Israel revoke Jarrar’s expulsion order.

Here is how you can help Khalida Jarrar:

or write your own letter to the following:

2)   Endorse the sign-on statement demanding the cancellation of the expulsion order against Khalida Jarrar. Click here to add your individual or organizational endorsement!

3)   Contact President Obama and your members of Congress. The attack on Khalida is an attack on Palestinian parliamentary legitimacy and political expression. Parliamentarians have a responsibility to pressure Israel to cancel this order.

Look up your House and Senate members’ numbers here.