As police violence against Black community members and protesters continued this week in Baltimore, we were again reminded why we are proud to be a part of the National Lawyers Guild. The NLG quickly worked with other groups to mobilize legal support for the #BaltimoreUprising by assisting through Legal Observation, jail support, and legal defense coordination for those protesting the police murder of Freddie Gray. 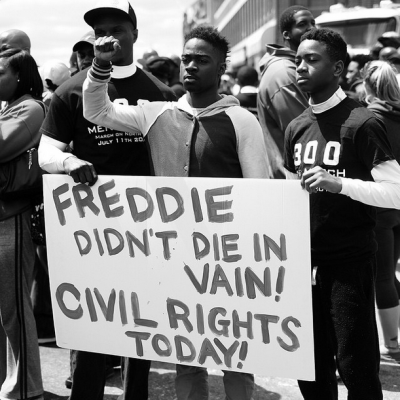 Last Friday, May 1st, Maryland State’s Attorney Marilyn Mosby recognized protesters’ demands for justice, saying, “To the people of Baltimore and the demonstrators across America, I heard your call for ‘no justice no peace.’” Her announcement that the six officers who arrested Freddie Gray will be criminally prosecuted was a clear and direct result of community protest. While news of the prosecution is encouraging—if only because it acknowledges police murder as murder—we should not expect these officers to face the same justice system as the general public. In the rare circumstances that police officers are criminally charged, they tend to face lighter penalties at every step of the process. In contrast,18 year-old protester Allen Bullock, charged with only misdemeanors, is being held on bond $150,000 higher than the BPD officer charged with murder. Furthermore, once charged, police officers face much lower conviction and incarceration rates than civilians.

However, even if the legal system treated police officers and civilians equally, it still would not provide the justice and change sought by residents of Baltimore. Prosecution of individual officers cannot correct the deeply entrenched conditions and systems that have enabled and will continue to enable police violence against Black and Brown communities. While punishment of some officers may have a small impact on police behavior, it will not provide the long-lasting, sustainable reform required to end police violence. Prosecution is a narrow and individualized process and not equipped to address any systemic problems.  The problem is not just these six cops. The problem is also not just the Baltimore Police Department (although they are notorious). While the police continue to enforce conditions of poverty, there will be violence. While the police continue to degrade and dehumanize women, trans* and gender non-conforming people, there will be violence. While the police occupy communities of color, there will be violence. When we seek an end to police violence, we seek, in part, an end to police. A just resolution can only come from addressing systemic issues in policing and real attempts to meet the needs of the community at large, things that prosecution is not designed to handle. A just resolution in Baltimore will address not only the city’s long history of police violence, but also the economic privation and state control that helped spur such strong resistance by its residents.

Like the police, the prosecutor’s office is fundamentally a source of violence against Black, Brown, and poor people. Despite Ms. Mosby’s willingness to prosecute police for their crimes, her office has detained hundreds of protesters in unconstitutional conditions—arguably in order to prevent and discourage further protest—and continues to prosecute Black youth for violation of an unconstitutional curfew. As a prosecutor, Ms. Mosby is herself a stakeholder is the system of mass incarceration and a gatekeeper to imprisonment for the young people of Baltimore.

We are hardly the first to recognize the limitations and failures of the criminal legal system to address violence, including the specific prosecution of these officers. Until we abolish the police, we must stand behind all efforts to create meaningful civilian oversight of police conduct, stop the flow of military equipment to police departments, and disarm the police. We must support campaigns to end the unjustifiable harassment of Black and Brown communities in the form of “stop-and-frisk” and broken-windows policing. While we work to end the police, we must take every avenue open to us to save lives in the meantime. 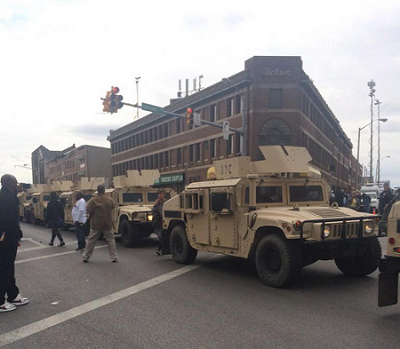 Since Michael Brown’s murder on August 9, 2014, the country has mobilized behind the simple truth that #BlackLivesMatter. Increased public attention to police violence provides us with the opportunity to dream bigger and demand better solutions than those offered by our current legal systems. Prosecution is not enough. As lawyers and legal professionals, we must follow the leads of community members and especially of young Black people most targeted by police. We hope many of you will join us in attending Law for Black Lives later this summer, where critical conversations about the role of legal support for these movements will be taking place. In the meantime, let’s ask Ms. Mosby to show her appreciation for the protesters she thanked last week by using her position to drop all their charges.

Oren Nimni is Chair of The United People of Color Caucus (TUPOCC) of the NLG and a People’s lawyer in Boston.

Sharlyn Grace is a National Vice-President of the NLG. She lives in Chicago, where she is an active member of NLG Chicago’s mass defense efforts and We Charge Genocide.