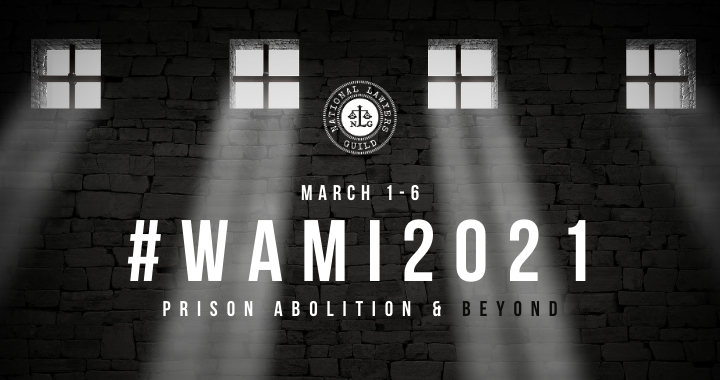 Following the National Lawyers Guild Law for the People Convention in October 2015, NLG membership adopted a resolution calling for “the dismantling and abolition of all prisons and of all aspects of systems and institutions that support, condone, create, fill, or protect prisons.” In honor of this resolution, in 2016 the NLG expanded our annual Student Day Against the Death Penalty to become the Week Against Mass Incarceration (WAMI).

For the 2021 Week Against Mass Incarceration (March 1-6), we ask NLG Law Schools and Local Chapters to organize around the theme of “Prison Abolition and Beyond” to include all locations and instances in which people are held against their will, including jails,  immigration detention, juvenile detention facilities, psychiatric wards, and more. We also intend the “beyond” to include consideration of the abolition of policing as part of the larger mass incarceration system (and in line with the Guild’s 2020 resolution supporting the abolition of police).

Ways To Participate in WAMI 2021

In 2021, due to COVID-19 restrictions and the virtual nature of most law schools, we encourage NLG members to organize digital events that highlight the many harms caused by the current mass incarceration system and carceral logic. This can include virtual panels and workshops, letter writing events, social media campaigns, research projects, and more! To help with your organizing, check out our NLG Scholars Network and see the list of resources below.

An ongoing project we ask law school chapters to undertake involves researching and publishing information on your campus police departments. NLG law student members at Northeastern University Law school created a template for analyzing the practices and policies of private police forces at universities. We are hoping all Guild chapters can produce similar reports to share! Take a look at the Guide To Interrogating Campus Police as Law Students to get started.

The Guild engages in numerous initiatives to promote an end to mass incarceration nationally and locally. Current NLG decarceration initiatives include the NLG Bay Area Prisoner Advocacy Network, the NLG NJ-DE Prisoner Legal Advocacy Network (PLAN), and the Guild Notes column, “Beyond Bars: Voices from NLG Jailhouse Lawyers.”  The NLG in conjunction with the Center for Constitutional Rights holds weekly sessions in which volunteers go through the tens of thousands of letters received every year from people in prison for either Jailhouse Lawyer Handbook requests (processed during handbook packing session nights) or NLG members requests. (This program was put on indefinite hold during 2020 due to the pandemic). NLG members are involved in various initiatives opposing policing, criminalization, solitary confinement, capital punishment, and new prison construction. The Guild also supported the 2016 and 2018 National Prison Strikes and  investigated and challenged deplorable conditions in numerous Texas Department of Criminal Justice prison facilities in the aftermath of Hurricane Harvey.

Please email NLG Director of Research and Education Traci Yoder at traci@nlg.org to share the events you are organizing! Everyone should post flyers, pictures, and event invites on the Week Against Mass Incarceration Facebook event page and join the conversation on Twitter using #WAMI2021 and #Decarcerate. Tweet to us @NLGnews!

Punishment and Policing in the Trump Era

The End of Policing

The Role of Police in Ending Mass Incarceration

The Policing Question: Protection vs. Service in 2020

Abolition for the People

Prison By Any Other Name: The Harmful Consequences of Popular Reforms

The Abolition and Justice Collective

NLG Webinar: Fighting for the Release of Detained Immigrants During COVID-19

Immigration Guide to How Arrests and Convictions Separate Families

Immigration Policy and Planning in the Era of Mass Incarceration

Following the Money of Mass Incarceration

Broken on All Sides

The House I Live In