Skip to content
The National Lawyers Guild (NLG) calls on Congress and the Secretary of State John Kerry to oppose U.S. inte 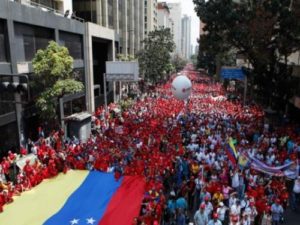 rvention in the ongoing conflict in Venezuela, as a violent campaign brought by Venezuela’s extreme right-wing opposition seeks to topple the recently elected government. Certain opposition leaders have called these anti-government demonstrations “La Salida” (the Ousting), revealing their intention to violently and forcibly remove the democratically elected government. This was the same agenda put forth by the opposition prior to the municipal elections in December 2013, when opposition rhetoric attempted to turn democratic elections into a referendum to overthrow the government.
For the last seven years, the NLG has observed Venezuelan elections – most recently, that of President Maduro in April 2013. NLG observers and other human rights groups (notably the Carter Center) found these elections to be free, fair, and exemplary of a democratic process. Despite this, the U.S. initially refused to recognize Maduro as the legitimately elected president of Venezuela.  It wasn’t until receiving strong criticism from South American governments that Secretary Kerry backpedaled and quietly acknowledged the legitimacy of the election results.
Citing the failed coup of 2002, NLG President Azadeh Shahshahani said, “ Considering previous attempts by the U.S. (and its allies) to violently overthrow a legitimately elected government raises concern that this is the case once more. The NLG opposes any U.S. interference in Venezuela’s internal affairs – including, but not limited to, such actions by the CIA, the International Republican Institute, and the National Democratic Institute.”
The NLG urges Congress and Secretary Kerry to pledge that no U.S. funds will be used to support violent, anti-democratic agendas, such as the one in 2002. International law demands this under the UN Charter Principle of Sovereign Equality, Art. 2(2); and the Organization of America’s (OAS) Charter Principle, Art. 3(b).  Furthermore, OAS Art. 18 prohibits indirect intervention in the internal affairs of another American state. The NLG urges the U.S. government to rightfully respect Venezuelan self-determination and sovereignty.
Read the NLG’s delegation on the April 14, 2013 presidential election and expanded May-June audit in Venezuela here.