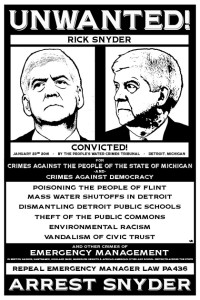 The facts of the Flint River lead poisoning are essentially undisputed. Enabled by Michigan’s unprecedented “emergency management” policies affecting primarily African-American cities, it’s a case of spectacular regulatory failure at all levels of government. The big remaining question is why has this disaster happened?

Investigators have focused on incompetence of state and federal environmental regulators, but less attention has been paid to Flint’s history of environmental racism.

Some 20 years ago, issues of environmental racism and environmental justice were at the fore of two major cases in Flint: the (1) Genesee Power Station (GPS) and (2) Select Steel. Members of the NLG Detroit and Michigan Chapter played leading roles in those legal fights, as we continue to represent the victims of lead poisoning in Flint today.

The GPS case involved a wood-burning incinerator sited near Flint’s impoverished North End, which had already been swamped with toxic, heavy industrial pollution. Negotiations with GPS resulted in an agreement to significantly reduce the amount of lead paint-contaminated construction and demolition wood the incinerator was allowed to burn. (The company originally described their business to state environmental officials as “burning demolished Detroit crack houses”.)

After that partial settlement, the Michigan Department of Environmental Quality (DEQ) insisted on a historic, first-of-its-kind trial, alleging that that they violated Michigan’s Civil Rights Act by permitting the GPS. The Genesee County Circuit Court enjoined more air pollution permits in Genesee County after a 1997 trial that included lots of evidence of increased lead poisoning in Flint because of the GPS, but the injunction was subsequently reversed on appeal for a procedural technicality.

The same plaintiffs also filed the first administrative Title VI environmental racism claim with the EPA in 1992. After losing and finding the file, the EPA and opened an investigation, but never issued any decision. Meanwhile, three of the four plaintiffs died.

The infamous Select Steel decision, a second major environmental justice case arising in Flint, was decided adversely after a bogus EPA investigation in 1998. In Select Steel, the same plaintiffs complained about a proposed (but never built) steel recycling facility that would further pollute their already overburdened community. EPA came under heavy political pressure in both Michigan and Washington, including threats to zero out the budget of their Office of Civil Rights. The EPA rendered a decision against environmental justice that abandoned any attempts to remedy environmental racism, refusing to bring public health and environmental quality in Flint up to standards enjoyed in white suburban communities. In significant part as a result of the Flint Select Steel precedent, environmental racism has found no legal remedy through the EPA.

Why did regulators ignore the pleas of Flint residents who were forced to drink smelly, foul and discolored water for a year and a half? Because that was the policy. Allowing substandard environmental and public health conditions in communities like Flint—ones that would never be allowed in whiter, more affluent communities—was precedent largely established in Flint in the 1990s.

The ongoing Flint River scandal was the result of emergency management and Governor Rick Snyder’s administration’s depraved indifference to health of people in Flint, as well as longstanding, de facto environmental policy to allow such pollution in these communities.

The above is merely a summary of complex issues, recounted fully in the Petition to Re-Open the Select Steel Investigation filed by Sugar Law Center, California Rural Legal Assistance and others, which can be read at: www.d-rem.org/joint-petition-to-epa-to-re-open-select-steel-investigation/