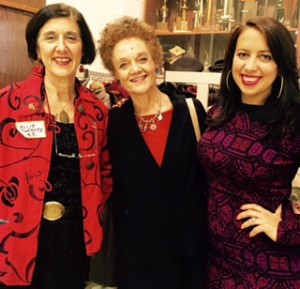 On February 14, I spent my birthday surrounded by a couple hundred people paying tribute to the warriors of Detroit’s activist community at the NLG Michigan and Detroit Chapter’s Annual Dinner. That night, the room was filled with activists young and old, law students, veteran advocates, movement lawyers, judges, elected officials and plenty of Guild members. Kathleen Cleaver, former Secretary for the Black Panther Party, delivered the keynote address on the historical significance of the Panthers and the city of Detroit for liberation struggles and Black unity. The importance of this political moment for Detroit and Flint, both cities under siege, was not lost on me as I listened to the honorees.

In the past few years, Michigan Governor Rick Snyder has appointed unelected Emergency Managers to govern both the cities of Detroit and Flint as a response to the cities’ fiscal challenges, which has led to the unilateral re-allocation of funding from critical resources, such as public education, to pay the city’s debt. Under emergency management, the people of both cities have suffered widespread violations of the human right to water.

In Detroit, tens of thousands of families unable to afford their water bills have had their water shut-off with no regard to their ability to pay or their physical and/or medical needs, resulting in severe medical consequences, tax foreclosures, and even neglect proceedings to have children removed from parents unable to keep their water on. In Flint, nearly 100,000 people, including children, have been poisoned by the unilateral decisions made by the State of Michigan—from the Emergency Manager, to the Department of Environmental Quality, to the Governor himself—to switch from the clean Detroit water system to the corrosive Flint River. What’s more, officials then lied about, and covered up, their knowledge that the water was toxic for more than a year. As a result, the people of Flint were told to drink, cook and bathe in water poisoned with dangerously high levels of bacteria, Total Trihalomethanes (TTHM) and heavy metals including lead.

Additionally, in Detroit, teachers have been participating in “sick outs” to protest the horrific conditions of public schools in that are causing health and environmental harms, have been shutting down schools.

The NLG Detroit and Michigan Chapter has been at the forefront of these fights, filing numerous cases, including a federal constitutional challenge to the Emergency Manager Law, currently pending on appeal in the Sixth Circuit (with the Sugar Law Center, ACLU and Center for Constitutional Rights as co-counsel). The NLG has also formally demanded that Health and Human Services Secretary Sylvia Mathews Burwell declare a public health emergency in Detroit and investigate the circumstances and policies that led to the crisis; supporting grassroots organizations demanding that the City of Detroit implement the water affordability plan approved by the City Council in 2006; and advocating for an income-based rate structure to water affordability. Also in Detroit, the NLG is representing the eight activists who were arrested in July 2014 for blocking a driveway to prevent water shut-offs. The City is vigorously prosecuting those cases and has appealed the trial court’s ruling allowing the necessity defense. The City has also appealed the denial of mistrial which has prevented the jury from deliberating or reaching a verdict.

In Flint, NLG attorneys have filed civil rights class-action lawsuits to hold the State and its officials accountable for the devastating harm they have caused. The NLG has also been providing Legal Observers for the numerous demonstrations that have arisen in response to both cities’ crises. This work, as evidenced at February’s Annual Dinner by testimonials  from people about what the Guild has meant to them over the years, is the epitome of movement lawyering. Read more about the NLG’s work in Detroit and Flint in this issue of Guild Notes, and visit www.michigannlg.org. ■