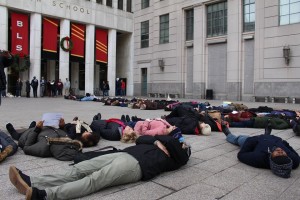 NEW YORK—On Thursday, April 2, two days before the 47th anniversary of the assassination of Martin Luther King, Jr., National Lawyers Guild (NLG) students and faculty will hold a day of action at law schools nationwide in solidarity with the Black Lives Matter movement against racist police violence and white supremacy. Despite strong, grassroots organizing and regular demonstrations since the murder of Michael Brown in Ferguson, MO, police killings of unarmed Black Americans continue with impunity. This week, NLG members will coordinate with other student and local groups to disrupt business as usual and call attention to the racist legal system which criminalizes and oppresses people of color.

As the nation’s first racially integrated bar association, the NLG has a long history of standing with social movements that challenge systemic criminalization and marginalization of people of color. The Guild’s commitment to racial justice continues today, and student members recognize their responsibility to working toward a more just legal system: “As law students, we support the work of activists who directly fight oppression and the racism of our society. We also appreciate our privilege and our responsibility to fight the same racism and oppression within our legal system, especially through supporting the work of radical activists by fighting their criminalization,” explained Tasha Marshall, President of the NLG chapter at Western New England School of Law.

Since the movement emerged from Ferguson last August, NLG students have been offering support and solidarity through legal observing at protests, holding “know your rights” trainings on police encounters, organizing demonstrations, and hosting events to discuss the links between racism, law enforcement, and the broader criminal justice system. In a recent statement on the Department of Justice’s scathing report on the Ferguson Police Department, Co-chair of The United People of Color Caucus (TUPOCC) of the NLG Oren Nimni states, “The NLG stands in full support of those actively resisting these policies and practices. We are encouraged by the work of Black Lives Matter activists in Ferguson and nationwide which has brought much needed public attention to the racially discriminatory policing practices that caused the deaths of Oscar Grant, Michael Brown, Eric Garner, Tony Robinson, and countless others. While we can and should continue to push for legal reform, it is also abundantly clear that the legal system sanctions and incentivizes the repression of Black communities, and that resistance is required.”

This Thursday, law students and faculty will bring the movement to law schools by a series of actions designed to publicly tie law enforcement’s continual disregard for Black lives to a racist and oppressive legal system. NLG Chapters from San Francisco to Boston will be organizing vigils, moments of silence during classes, trainings and events to bring awareness to the legal community, and visible reminders such as posters and banners at their law schools.

Claire White, NLG National Student Vice President and member of the UC Davis Law Guild chapter explained: “As students, we spend much of our time in the classroom studying history and theory, while all around us the Black community is being directly targeted and oppressed at all levels by the justice system we’re preparing to serve. It’s time for law students of conscience to stand up and speak out.”

The National Lawyers Guild was formed in 1937 as an association of progressive lawyers and jurists who believed in the reconstruction of legal values to emphasize human rights over property interests. The Guild is the oldest and most extensive network of public interest and human rights activists working in the legal field.