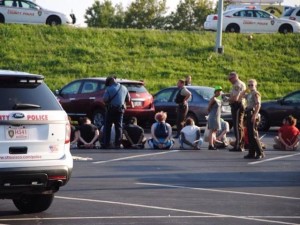 ERGUSON, MO—Police violently cracked down on activists yesterday after imposing a State of Emergency in St. Louis County in an effort to stifle protest commemorating the murder of Michael Brown one year ago. More than 150 people were arrested in multiple demonstrations across the St. Louis area, including at least nine Legal Observers with the National Lawyers Guild (NLG).

“The NLG condemns the State of Emergency in St. Louis and the targeting of political organizers,” said NLG Executive Director Pooja Gehi, who was arrested last night while observing police. “My wrongful arrest while trying to record police abuse is further evidence that law enforcement has nothing but contempt for political resistance and those who would try to protect it.”

More than 65 people were arrested earlier on Monday at the Department of Justice and at least 85 people were arrested while trying to disperse after a freeway blockade in west St. Louis County. Arrestees also include multiple medics, who were in the streets to administer healthcare to injured protesters. While some are starting to be released, many still remain in jail and in some cases are being denied food and water. At least one NLG Legal Observer was interrogated while in jail.

Despite court ordered restrictions on police use of chemical weapons in Ferguson, law enforcement extensively used pepper spray and tear gas on peaceful protesters over the past two days. Other militarized equipment such as the Long Range Acoustic Device (LRAD) were also witnessed by Legal Observers.

In the aftermath of another police shooting of an 18-year-old African-American protester in Ferguson on Sunday, who still remains in critical condition, the NLG observed police using excessive force and brutality in numerous arrests yesterday.

“The people of Ferguson are still seeking justice for Michael Brown and don’t deserve to be violently assaulted by police,” said NLG Mass Defense Coordinator Kris Hermes. “The level of police brutality against protesters and the imposition of a State of Emergency is a testament to the significant amount of work left to be done.” The NLG Mass Defense Campaign will continue to provide support to political activists in Ferguson and other cities across the country.