The following statement was prepared by the NLG Labor and Employment Committee: 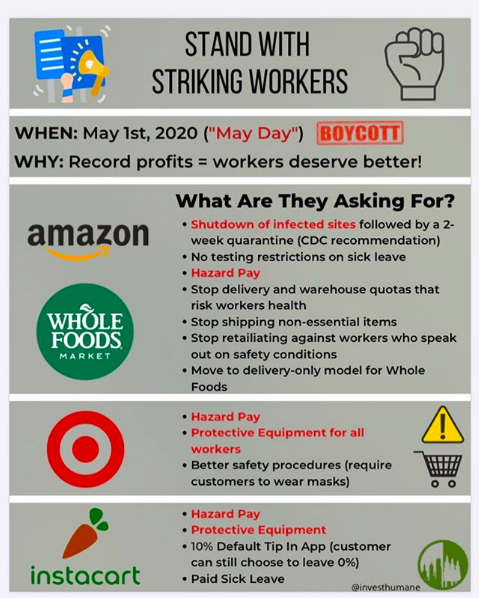 The NLG expresses solidarity with workers and communities across the globe who are mobilizing on May Day 2020.

Around the globe, International Workers Day is a day of celebration of the working class movement and its achievements. It is also a day to escalate the fight against the ruling class, the state forces that protect them, and all systems of oppression. This May Day the working class is immersed in a crisis of historic magnitude.

The COVID-19 pandemic and corresponding economic crisis have revealed the incompatibility of the capitalist system with basic human rights. The profit-driven economy laid the foundation for the loss of income by billions around the world, pushing communities into deeper precarity even as the wealthy continue to grow their wealth in a new stage of disaster capitalism. Added to that are decades of neoliberal structural adjustment policies and centuries of colonialism and structural racism, the foundation for the disproportionate impact of the pandemic (as well as environmental racism and climate disruption) on the most marginalized: low-wage workers, Black and Brown communities, migrants and the poor around the globe. In the U.S. and all over the globe, women are also bearing the brunt of this crisis, and are disproportionately represented in frontline essential worker jobs. In addition, workers’ families have a right to care. There can be no return to work without state support for child and elder care.

Workers on the frontlines of this pandemic from healthcare workers, to food workers, transportation workers, airline workers, janitors, and many more are providing what have been deemed “essential services,” and yet are facing heightened exploitation on the job.  While their labor has been deemed essential, the workers themselves have been treated as disposable by their employers and governments.  They have been intentionally excluded from the most basic workplace and health protections, excepted from economic assistance, and yet forced to continue to work under economic duress and exposure to unsafe conditions.

In addition, there is a long and nefarious history in the U.S. and around the world of union busting and persecuting “essential” workers who attempt to organize and strike, and these illegal and immoral anti-union practices are only increasing during the pandemic.  Numerous countries are placing on “hold” workers’ rights to organize and corporations are directly interfering with essential workers who are trying to create unions now in an effort to fight for better wages and workplace conditions.   The cooptation of the pandemic by the corporate state to attempt to deal a death blow to organized labor and the ability of workers – including those in the informal and gig economy – to mobilize is precisely the type of collusion and disaster capitalist policies that helped create the collapse of economic systems and has left over 30 million U.S. workers alone unemployed within a month’s time.

We join the demands of workers worldwide who insist upon a worker-led and worker-centered economic response to COVID-19 that prioritizes the needs and interests of those most vulnerable.  We join the call to:

We must fight to ensure that all workers are provided adequate protective gear, clean workplaces, paid sick leave, paid personal leave and hazard pay. Workers should also have the right to refuse work without retaliation.

Defend the Right to Organize and Strike

Frontline workers are striking for their lives, in meatpacking and the broader food chain, transit, manufacturing, and other sectors.  The U.S. administration and global corporations are trying to force workers to risk their lives while ignoring or eliminating health and safety protections. We must defend the right of workers to strike, as well as to organize their workplaces without retaliation, violence or harassment. We reject and oppose the increasing use of surveillance and other tactics to intimidate workers, including immigrant workers.

Housing is a human right. We join the call for a moratorium on rent, evictions and debt.

We must fight to win universal healthcare for all. We demand adequate food, water and public services for all.

We must fight for the release of all those imprisoned for non-violent offenses, political prisoners, and migrants detained for seeking asylum. Detainees and prisoners who remain incarcerated are being exposed negligently and unnecessarily to COVID19, and prisons are quickly becoming the most contaminated places among the population, with dozens of prisoners and detainees dying of the virus.  We reiterate our demand to fully abolish the mass incarceration system.

Give Immigrants Full Protections Under the Law

It’s unacceptable that undocumented immigrants are continually denied access to healthcare, unemployment and other benefits.

End the Use of Unilateral Coercive Measures such as Economic Sanctions and Blockades UCM’s imposed on Cuba, Iran, Venezuela, Gaza and several nations in the form of sanctions, embargos and blockades have devastated their efforts to combat COVID-19 and resulted in the unnecessary deaths of tens of thousands of people, while driving citizens further into economic despair.

Related: BLOG: May Day 2020 and the State of Protests During the Pandemic