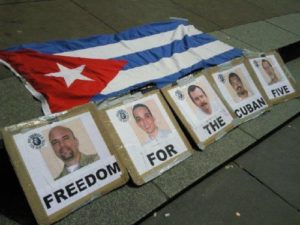 NEW YORK — The National Lawyers Guild (NLG) welcomes the December 17 release of the remaining members of the Cuban Five, Gerardo Hernández, Ramón Labañino and Antonio Guerrero after serving 16 years in US prisons. The other members of the Five, René González and Fernando González, completed their full sentences, minus good time, and returned to Cuba after serving about 15 years each in US custody. The NLG, including its International Committee and Cuba Subcommittee, has long campaigned for the release of the Cuban Five, passing internal resolutions, issuing letters to federal officials, submitting friend of the court briefs, and urging an international investigation of their case, which led to the International Commission of Inquiry in London this past March.

For more than 30 years after Fidel Castro took power, over 3,400 Cubans have died and over 2,000 have been wounded in terrorist attacks by extremist anti-Castro exile groups based in South Florida. In 1990, the Cuban government sent the five men to Miami to monitor and disrupt such groups and prevent future attacks. The Cuban Five remained nonviolent throughout their mission.

While the US media has repeatedly portrayed the Five as convicted Cuban spies, none were even charged with espionage. Hernández, Labañino, and Guerrero had originally received life sentences after a Miami jury falsely convicted them of conspiracy to commit espionage. The most serious charge against the other two men was working for Cuba without registering as foreign agents, and each was initially sentenced to some 15 years in prison.

Although President Obama has signaled a new direction in US-Cuba relations it is unclear whether Obama has ordered an end to US attempts to topple the Cuban government that have endured since the 1960 State Department memo calling for the US to “bring about hunger, desperation and overthrow of government.” Under the current administration, the US Agency for International Development (USAID) had secretly attempted to build an opposition movement in Cuba which it acknowledged had no significant support from within the island. These covert actions as documented by the Associated Press include: (1) sending undercover Latin American youth to Cuba posing as health workers; (2) establishing a fake “Cuban Twitter” program, collecting the data of 50,000 unsuspecting Cubans; and (3) infiltrating the underground hip-hop scene and co-opting artists. As NLG member and Cuba Subcommittee Chair Art Heitzer explained, “Rather than achieving their stated goals of sparking an opposition movement, these programs deceived and co-opted Cuban citizens, while discrediting their attempts to express legitimate grievances.” These do not include the classified actions of the CIA and NSA.

The NLG calls on President Obama to: (1) use the full measure of his executive authority to encourage above-board travel and interaction between the peoples of the US and Cuba; (2) immediately remove Cuba from the State Department’s list of state sponsors of terrorism; (3) end all efforts to promote defections of Cuban internationalist doctors and medics and offer cooperation in countering Ebola and other preventable diseases; (4) grant Cuban applicants the same broad approval of visas to visit the US as Cuba does for US travelers; and (5) take all steps possible to end the intensifying effect of the US economic blockade of Cuba, which has for 23 consecutive years been condemned by a world consensus, most recently by a vote of 188-2 in the UN General Assembly.

The US must also respect the political asylum status of Assata Shakur in accordance with international law and not use the prospects of normalized relations as a means to seek her extradition.

After a century of occupation and decades of misuse and abuse, the US should also promptly return the US naval base at Guantánamo Bay to Cuban sovereignty.