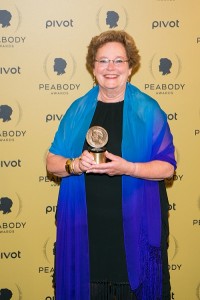 Producer/director Abby Ginzberg holds her award for “Soft Vengeance” at the 74th Peabody Award at the Cipriani Wall Street in Manhattan on May 31, 2015. (Benjamin Chasteen/Epoch Times)

Soft Vengeance: Albie Sachs and the New South Africa, the latest film by Abby Ginzberg, Bay Area filmmaker and former national NLG leader, topped off a year of worldwide screenings and rave reviews by receiving a Peabody Award, one of the highest honors in documentary film and public affairs programming.

Narrated by Alfre Woodard, Soft Vengeance focuses on revolutionary South African lawyer Albie Sachs, who addressed a number of NLG national meetings during the struggle to overthrow apartheid. The documentary portrays his journey as a rights lawyer who was imprisoned and tortured in solitary confinement in Cape Town, and forced into exile.  In 1988, he was the victim of a car bomb set by the South African security forces in Maputo, Mozambique, which cost him his right arm and the sight of one eye, but nonetheless miraculously survived. Returning to South Africa following the release of Nelson Mandela, Albie helped write the new Constitution and was then appointed as one of the first 11 judges to the new Constitutional Court.

Abby, a former NLG Bay Area chapter leader, and NLG Vice-President during Paul Harris’ presidency, accepted the award at the Peabody ceremony on May 31st.  “Albie is one of the key champions for equality of our time and we are honored to be entrusted with his legacy on film,” Abby commented. Abby’s justice-themed films have included documentaries on civil rights justice figures including the NLG’s Arthur Kinoy; Cruz Reynoso, the first Latino appointed to the California Supreme Court; and Thelton Henderson, one of the first African American federal judges who is currently overseeing the reform of medical care in California prisons. She has made two documentaries on NLG history, Justice is a Constant Struggle, and Justice is Still A Constant Struggle. Abby’s next film, Agents of Change , co-produced with Frank Dawson and featuring actor/activist Danny Glover, tells the untold story of the civil rights movement on college campuses, which challenged the status quo and created demands for Black studies programs and increased minority representation on campus. ■