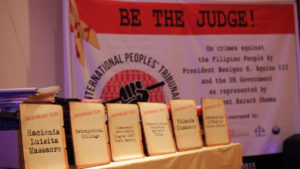 WASHINGTON, DC—An International Peoples Tribunal (IPT) looking into the human rights abuses in the Philippines under the administration of Benigno Simeon Aquino III is set to take place in Washington, DC on July 16-18. Former US Congresswoman Cynthia McKinney and prominent human rights attorney Azadeh Shahshahani will be amongst the distinguished panel of jurors who will hear live testimonies of witnesses from the Philippines. Conveners of the tribunal include theInternational Coalition for Human Rights in the Philippines, the National Lawyers Guild, the International Association of Democratic Lawyers, and Ibon International.
“This tribunal is being held at the behest of victims of human rights abuses and other crimes committed under the Aquino government. They are convinced these crimes are committed with impunity under Aquino with the support of the US government,” states Jeanne Mirer, President of the International Association of Democratic Lawyers (IADL), a convening organization of the IPT. 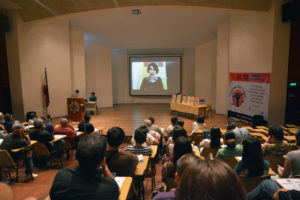 “As the call for truth and accountability builds, there is also a growing clamor for President Aquino to step down because of weak leadership, most recently galvanized by his handling of the Philippine National Police operation at Mamasapano, Maguindanao last January that resulted in a death-toll of over 60, including civilians” states Katrina Abarcar of the International Coalition for Human Rights in the Philippines (ICHRP).
“The Mamasapano operation raises important questions for us here in the US not only over Aquino’s ability to lead, but over the extent of the US military’s direct involvement in Philippine domestic security operations, especially since we as peace advocates in the US have long lobbied to cut US support to the Philippine military for the latter’s culpability in gross human rights violations, “ Abarcar continued.
The IPT will also look into the role of the US government as represented by the Obama administration. Amongst the cases to be heard in the IPT is that of the murder of Jennifer Laude, a Filipina transwoman found strangled to death in a hotel room in Olongapo City after being last seen with US Marine Joseph Scott Pemberton last October. 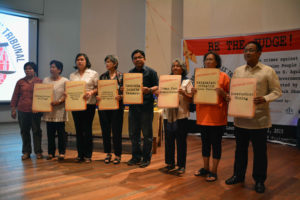 The murder of Laude and retention of US custody over Pemberton despite a Philippine arrest warrant continues to raise public scrutiny over the impact of US military presence in the Philippines by way of the Visiting Forces Agreement (VFA) and the newly-signed Enhanced Defense Cooperation Agreement (EDCA), and the immunity from the Philippine court system US military personnel are granted under these agreements between the US and Philippine governments.
International outrage over extrajudicial killings in the Philippines led to a 2007 US Senate hearing that resulted in cuts to the US military aid package to the Philippine government.
An official gathering to publicly and formally announce the IPT was held this week in Manila, along with witnesses, victims, and families of victims of human rights abuses.
For more information, visit internationalpeoplestribunal.org
Photos [top to bottom]: March 12 – Manila Launch of the International Peoples Tribunal; IPT Juror and NLG president Azadeh Shahshahani delivers a skype address from the US; (3) Philippine human rights advocates symbolically hold up charges against Aquino.