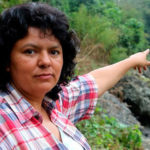 Georges-v-UN_Amicus-Brief_HR Orgs_6-3-15 Joining 23 other human rights organizations, the NLG signed on to this amicus brief in support of victims of the 2010 cholera outbreak in Haiti.

FOR IMMEDIATE RELEASE Contact: Mark Sullivan, Producer msullivanlegal@gmail.com | 831.239.6853 A delegation from the National Lawyers Guild (NLG) traveled to Honduras in August 2015 to produce a film documenting the looming threat of the first semi-autonomous zones, known as Zones for Economic Development and Employment (ZEDEs).  The film titled, ZEDEs:  Neocolonialism and land grabbing in Honduras is […]