Ahead of the annual NLG Week Against Mass Incarceration, NLG members from Northeastern Law and Chicago NLG have produced a report on private campus police forces using the Northeastern University Police Department as a case study. We encourage all NLG student chapters to conduct similar research on the private campus police forces at their schools and share the results! Please check out the full report as well as this guide to replicating the project. 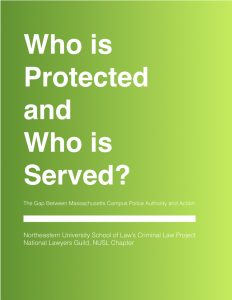 In recognizing racist and systemic police violence around the country and considering the presence of private police officers all around our law school campus, we sought to investigate the legal authority governing those officers. We are law students from Northeastern University, and we wanted to ask: What is the source of authority for campus police, and how are they able to operate in essentially the same manner as state or local police officers? To answer these questions, we analyzed statutory and case law for Massachusetts and attempted to gather as much information as possible on the activities of Northeastern University’s police force in particular. We then documented all of our findings in a comprehensive report now available to the public, titled “Who is Protected and Who is Served: The Gap Between Massachusetts Campus Police Authority and Action.”

We found that campus police appear to be operating in a gap between the judicial interpretation of their authority and the authority granted to them in practice by employing institutions. Private police in Massachusetts have the statutory power to make arrests in certain circumstances, and nothing more. Even when further empowered as deputy sheriffs, campus police officers and departments are seemingly acting beyond the bounds of their statutory authority. Additionally, based on our case study of Northeastern University Police Department (NUPD), campus police are not subject to public accountability regarding the availability of their data. Campus police are mandated to maintain a record of and provide information on arrests, stops, and some demographic data on who is stopped to members of the public upon request. However, Northeastern’s independent student newspaper, The Huntington News, provided much more comprehensive information on campus police activity than the records we obtained from NUPD itself.

Our case study of Northeastern in particular showed that NUPD most frequently interacts with members of the public, with only one fourth of their logged incidents being reported by someone definitively affiliated with the university involving another university-affiliated person. Between August 2017 and October 2018, NUPD almost exclusively responded to “quality of life” violations such as public intoxication and noise complaints, and minor thefts of backpacks and bicycles. Despite this—and consistent with the broader trend of police militarization—they also carry assault rifles and have the capacity for inflicting massive violence, as campus police around the country have done. We conclude that campus police in Massachusetts enjoy imbalanced privacy from public scrutiny compared to their statutorily-granted level of authority. In short, while NUPD effectively operates in a way indistinguishable from public police forces like Boston Police Department, NUPD is shielded from the same level of public scrutiny and accountability as public police forces.

We encourage NLG student chapters at other schools around the country to conduct a similar exercise. We found the process to be enlightening and, above all, concerning. We hope that students find our one-page Guide to Interrogating Campus Police as Law Students helpful, and we are open to being contacted at nuslcriminallawproject@gmail.com if we can be supportive in some way! ■