Movement legal work for the conventions was a big success, thanks to hard working chapter coordinators Jocelyn Rosnick and Jacqueline Greene, NLG Ohio, and Mary Catherine Roper and Michelle Grant, NLG Philadelphia. Members and staff from across the country also joined the efforts.

Surveillance/militarization were concerns at both conventions, designated “National Special Security Events” (NSSE’s) with expenditures of $50 million each. Earlier, The Intercept had revealed that DHS and the NYPD were monitoring Black Lives Matter, and FBI and local police were visiting activists at their homes. In Cleveland, activists built encrypted servers and communications; in Philadelphia, encrypted phone/text communications. A chain of custody to the legal team protected LO notes as attorney work product.

The 30-person jail support team fielded calls, logging arrests, and sent jail support teams to await releases. NLG, ACLU and NAACP lawyers reviewed a video of the FBI questioning activists on their porch, while police entered the home without consent or warrants, then drafted a press release condemning this and other raids. Each night there was a debrief where all teams gave updates. Feedback was immediate and constructive.

There were 23 arrests, including two felonies. The cases are ongoing, with NLG and NAACP lawyers representing defendants.
DNC: The 2,000+ police in Philadelphia were not visible as in Cleveland. Convention areas were also fenced and Secret Service guarded.

Unlike Cleveland, LOs in Philadelphia’s protest zones were spread throughout the area: city hall and municipal building plazas close to downtown, with FDR Park and the convention arena three and four miles south. Marches from the plazas routinely went all the way to the arena. LOs faced 90°+ heat and long walks: comfortable shoes, light clothing, water and hydration pills. “Captains, check your teams!”

Few police were seen: several dozen on bicycles would accompany even the large marches, followed by vehicles. 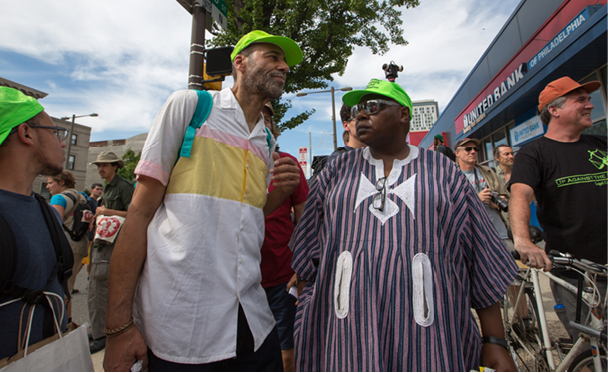 Maina Kiai, the UN Special Rapporteur on the rights to freedom of peaceful assembly, convened a hearing which I moderated. Witnesses included DNC Action Committee and Philadelphia Black Lives Matter. Lawyers testified about disability rights protesters and the city’s history of racial profiling.

I invited the rapporteur to join us at the Black Resistance protest, a march from historically black North Philadelphia, 2.5 miles south to city hall, and then four miles to the convention.

Surprise! Kiai and his team showed up. I introduced him to the LOs and gave him a green hat. We moved with the march.

Later, protesters chased a white male with a videocam out of the march. He ran to a police car where his apparent fellow officers surrounded him, ringed by bicycle police. As LOs moved closer, the rapporteur pulled on his green hat and moved with us to the front line. The world’s top speech monitor was with us.

The DNC had 106 arrests, mostly misdemeanor citations. Eleven arrests were for scaling the convention fence. All defendants are represented by Up Against the Law.
Thanks to all who put in the work and/or made donations. Protests will continue, and the Guild will be there. ■