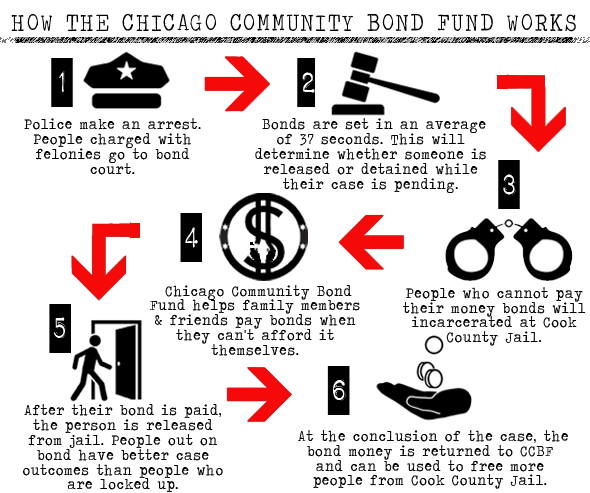 From August through October 2016, Chicago NLG member Max Suchan received the first annual NLG Weinglass Fellowship to work full time for the Chicago Community Bond Fund (CCBF).  This grant, named after renowned criminal defense attorney and constitutional law advocate Leonard Weinglass and made possible from a generous bequest from his estate, allowed CCBF to triple its volunteer capacity during that period in order to pursue the organization’s goal to eliminate monetary bond in Illinois and challenge pretrial detention more broadly.  CCBF also maintains a revolving fund to post bond for people locked in Cook County Jail while awaiting trial.  To date, the organization has freed 41 people from jail or house arrest, posting more than $200,000 in funds the group has received almost exclusively from grassroots donors.

Until Max became a Weinglass Fellow, CCBF remained an all-volunteer collective since it was founded in August 2015. The Fellowship enabled Max to spearhead efforts to organize a mass volunteer orientation training in September where 44 people were trained to work in CCBF’s post-bond support, fundraising, and education and advocacy committees.  This new influx of energy has allowed the organization to triple its capacity at a critical juncture when work to end the use of monetary bond in Chicago is at an all-time high. On October 14, a group of law firms, including Chicago’s MacArthur Justice Center, filed a lawsuit against municipal and criminal division judges making local bond decisions as well as the Cook County Sherriff. The lawsuit challenges the detention of people due to their inability to afford bond as a violation of Equal Protection under the US Constitution. CCBF referred plaintiffs to the lawyers and posted bond for one plaintiff this week after the lawsuit was filed. Additionally, CCBF helped spearhead efforts to bring the lawsuit attorneys, policymakers, and community organizations and activists together in coalition to pursue a myriad of legal, legislative, and grassroots organizing strategies to end money bond and challenge pretrial detention.

Through this coalition work, Max utilized the Weinglass Fellowship to conduct press trainings with people CCBF bonded out, ensuring that those most directly impacted by pretrial detention are centered whenever possible at a time when local and national media coverage of bond funds has greatly increased.  Using his knowledge of criminal law, Max’s trainings included information on how to conduct media interviews without compromising legal rights, as many of the cases against people CCBF has posted bond for are still pending.

The ability to connect new volunteers to all of these efforts has allowed CCBF to sustain its work and expand its efforts. The Fellowship allowed Max to devote full-time energy to other crucial aspects of CCBF’s work-including implementing plans to post bond for individuals in jail and activists arrested at political actions on an almost weekly basis, fundraising, and providing individualized support to people once the organization freed them from jail. CCBF is currently on the brink of organizing a concerted fundraising drive to replenish general funds to post more bond. Since felony charges in Cook County often take at least a year or two to go to trial or otherwise resolve, many of the bonds CCBF has paid out will not return to the organization for some time. Currently six bonds have returned to CCBF over the last year, and no bonds have yet been forfeited. ■