The Southern University Law Center’s NLG Chapter (SULC NLG) has enjoyed a year of bold initiatives, meaningful engagement, and productive planning. Focusing on timely and relevant issues of social importance, the SULC NLG has provided the Law Center and the greater Baton Rouge community resources and programming upon which relationships can flourish and collective progress can be championed. 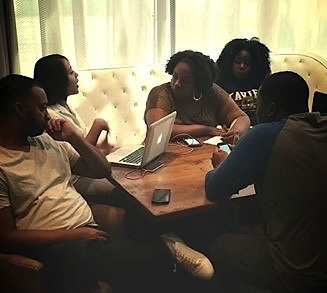 SULC NLG at a scripting meeting for their “Know Your Rights” video.

2015-2016 was a year of rebuilding focused on membership, setting the tone of the SULC Guild, and offering an alternative law school experience through thoughtful programs, projects, and initiatives. Our chapter increased membership from 0 members to 43, totaling 83% of the NLG membership in Louisiana State. Recently, SULC NLG was announced as a finalist for the HBCU’s Best Student Organization Award in their national award ceremony that celebrates  achievements at historically Black colleges and universities throughout the US. More highlights from the SULC NLG Chapter this year are below:

The SULC NLG filmed three videos for the INpower Initiative during the year: Stop and Frisk, Recording the Police, and Rights When Detained. Members traveled to New Orleans and different parts of Baton Rouge to film footage.