I have never felt more moved by my Jewish heritage than I was this spring while legal observing a group of IfNotNow activists protest American Jewish institutional support for the ongoing Israeli occupation. IfNotNow is a movement for freedom and dignity for all Israelis and Palestinians, whose name invokes the maxim by Jewish leader Hillel the Elder: “And if not now, when?” I have not embraced my Judaism for many years, instead seeking guidance and community through secular social justice work. My journey brought me, among many wonderful destinations, to my law school NLG chapter, and soon to a career as a direct legal services attorney. 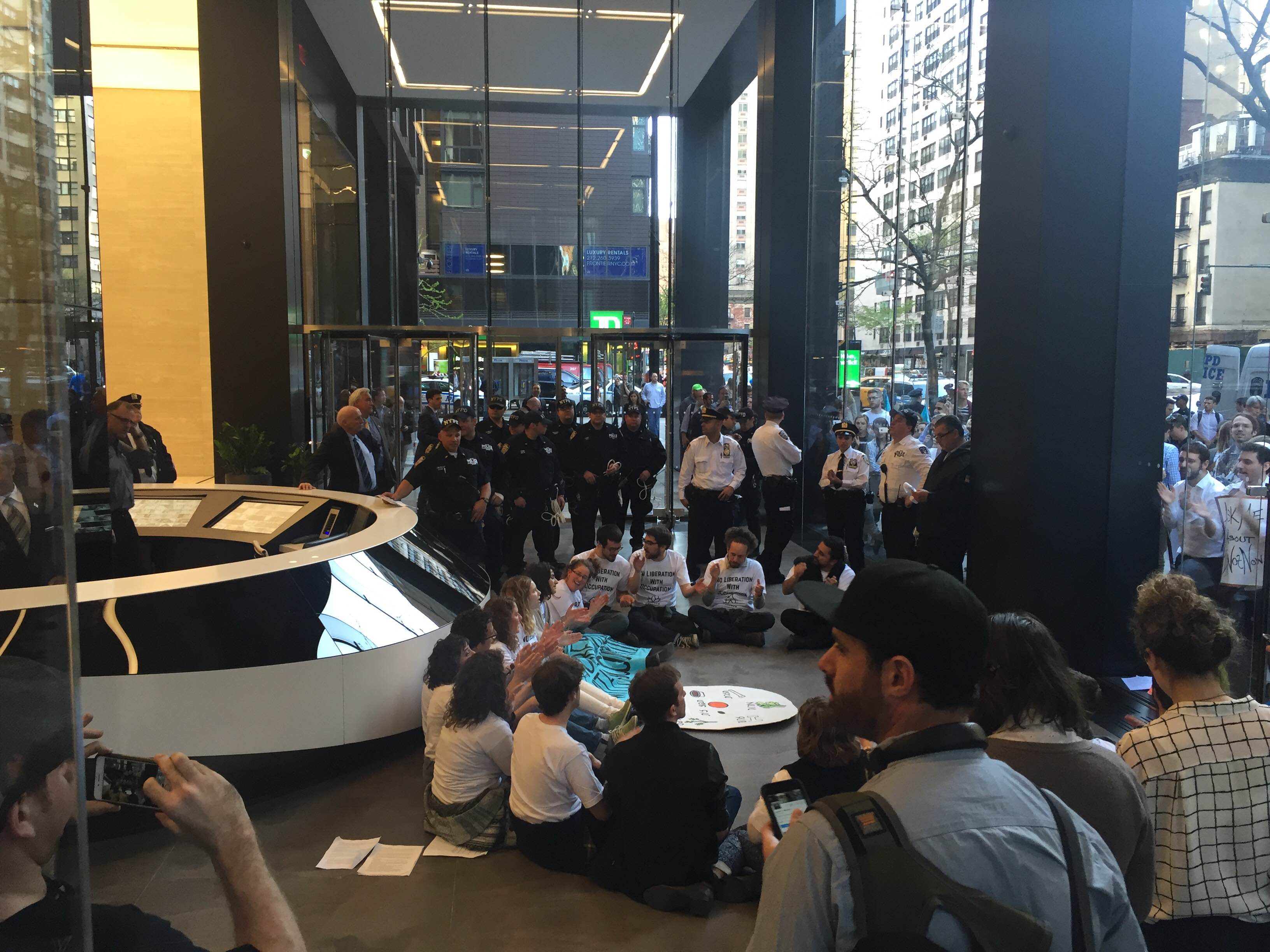 NYPD look on as activists occupy the lobby of the ADL. (Photo: Zac Rudge)

This year, I found myself longing to reconnect with my roots and celebrate Pesach Seder, the ritual meal of my favorite Jewish holiday. Thanks to a Legal Observer (LO) request from a fellow Guild member and mentor, I got my wish. As a legal observer, IfNotNow’s April 20th ‘Liberation Seder’ in New York was an unbelievably moving demonstration to support. Over 100 young American Jews joined together in the Anti- Defamation League (ADL) lobby in Midtown Manhattan in exuberant and peaceful song to declare, as our ancestors have for generations, Dayenu! Enough! Enough of the occupation of Palestine; of the daily nightmare lived by Palestinians and of the moral crisis promulgated by the American Jewish Establishment’s occupation support.

While Pesach (Passover) commemorates the liberation of Jews from slavery in Egypt, IfNotNow urges that “liberation is incomplete while we maintain support for the occupation over the Palestinian people.” IfNotNow organizer Mil Dranoff told reporters, “I cannot continue to passively watch and condone our Jewish communal leaders’ support of an occupation that denies freedom to millions of people. That is not the Judaism I was raised on and it isn’t the one I will continue to practice.” Liberation Seder participants celebrated Judaism’s core tenants of social justice and tikkun olam (healing the world). Passersby, including ADL staff, gathered around the building’s glass-walled lobby to observe the celebration and engage with IfNotNow organizers. Activists continued singing joyful Pesach songs, even as 17 of the peaceful protestors were arrested and ushered into police vans. Two experienced LOs guided me through the process of recording the arrestees’ names and documenting police-protestor interactions.

This action, combined with sister-actions in Washington, Boston, Chicago, and the Bay Area, generated visibility and support for the IfNotNow movement. It progressed the movement’s demands for an end to the occupation and for institutional recognition that the occupation is not representative of the Jewish community’s values. This was my third legal observation with the Guild, my final time observing as a law student, and a reminder of the power of public political expression. Even in our roles as neutral onlookers tasked with ensuring that IfNotNow demonstrators could express their political opinions safely and free from unconstitutional limitations, I was deeply moved by the opportunity to observe these young activists exercising their most fundamental constitutional rights in pursuit of social justice. ■