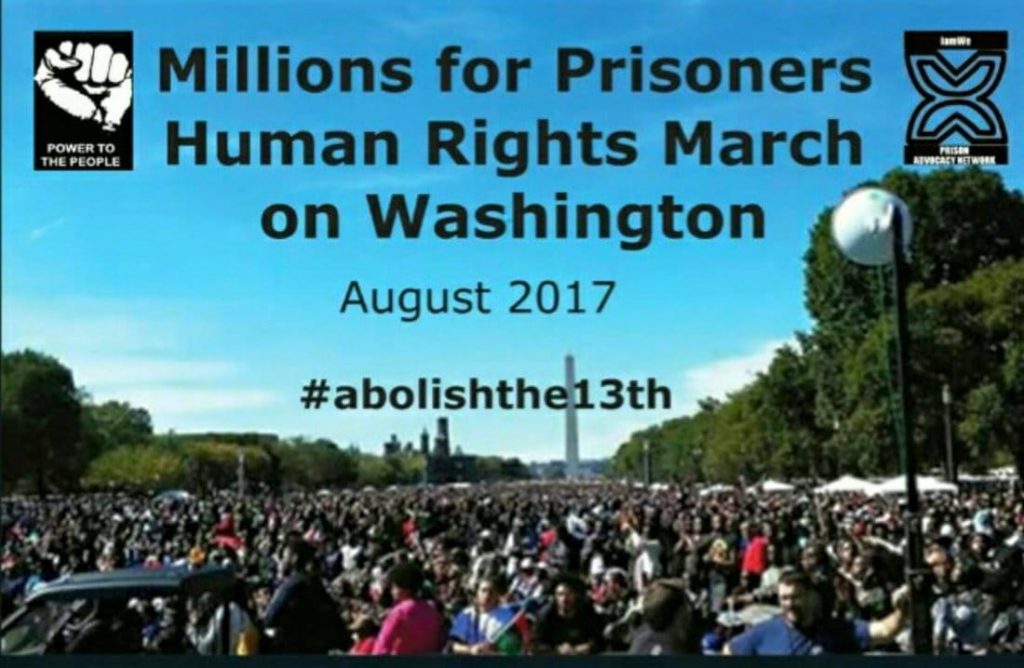 On August 19, 2017, thousands will gather in Washington D.C. in solidarity with those behind bars. The Millions for Prisoners Human Rights March will move forward with this mission statement:

“We seek to unite activists, advocates, prisoners, ex-prisoners, their family and friends, as well as all others committed to the fight to drastically reduce or eliminate prisons and the prison system, and replace them with more humane and effective systems. Our aim is to expose the prison industrial complex for the human rights violation that it truly is. We want to challenge the idea that caging and controlling people keeps communities safe. We believe that for too long our nation has relied upon incarceration as a way to solve broader social problems to its detriment. In August of 2017 we will march on Washington to bring world attention to the continued slavery and involuntary servitude in America, enabled by the 13th Amendment and to highlight the ever increasing movement against the prison industrial complex.”

Here are their core demands for action:

A) We DEMAND the 13th amendment ENSLAVEMENT CLAUSE of the United States Constitution be amended to abolish LEGALIZED slavery in America.

B) We DEMAND a Congressional hearing on the 13th Amendment ENSLAVEMENT CLAUSE being recognized as in violation of international law, the general principles of human rights and its direct links to:

The march is being sponsored by iamWe Prison Advocacy Network, a Nonprofit, Human Rights organization, dedicated to promoting religious tolerance, prisoner rights, and human kindness. iamWe is committed to educating on the effects of racism and classism that has led to the disproportionate imprisonment of Blacks (New Afrikans), Latinos, Native American and poor whites, and encourages prisoners to find their life purpose, through life skill curriculums and personal spiritual development. They are dedicated to advocating for Politicized Prisoners, Political Prisoners, and for the ending of Mass Incarceration. iamWe is part of the New Abolitionist Movement, which takes into consideration the reinvention of slavery in America found within the prison industrial complex. Although the aim of abolishing slavery remains unchanged, the means of accomplishing this requires new methods that are reflective of the present time and situation.

It is a much needed time to put the issue of mass incarceration on the minds of the public, especially since the new Attorney General Sessions wants to roll back every progressive policy that ever came into play under Obama, and vows to criminalize even more people. The National Lawyers Guild stands in solidarity with the Millions for Prisoners Human Rights March, joining more than 100 other endorsing organizations. We hope the movement against prisons will continue strong despite new challenges on the horizon, and that the people inside will know that those on the outside continue to fight for them.