On July 6, Assistant US Attorney Rizwan Qureshi quietly filed a motion to dismiss all 39 remaining inauguration day (“J20”) charges. The motion simply said, “After further review, the United States, in the exercise of its discretion, has determined that these matters should be dismissed without prejudice.” (“Without prejudice” means the prosecutors can re-file the charges at their discretion at any time within the statute of limitations, which appears to be six years for felonies in Washington, 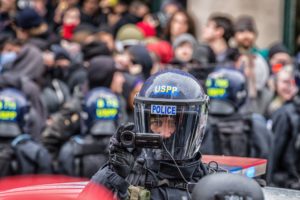 DC such as inciting a riot and destroying property.) The motion being filed on the Friday afternoon of a holiday week was not surprising since the prosecution had a lot of reason to want these cases to fade away—namely, the fact the lead prosecutor had been caught hiding evidence.

As I reported at the end of the second J20 trial, the prosecutors once again failed to secure any convictions at trial. These failures were despite the lead prosecutor, Jennifer Kerkhoff, making melodramatic claims that the participants in the anti-capitalist/anti-fascist march to contest Trump’s inauguration had acted as a “sea of black” to terrorize and destroy Downtown DC until the outnumbered and overpowered DC Metropolitan Police Department (MPD) finally contained them and saved the city.

These assertions were supported by cop after cop in both trials (November 2017 and May 2018) testifying about violence and destruction in the streets. The police testimony in each trial was given additional power with the ostensibly thorough testimony of the lead detective, Greggory Pemberton, who claimed to have watched hundreds of hours of video hundreds of times and to have personally tracked individuals by the items they wore or carried. This testimony was delivered through multimedia presentations including videos, still images from the videos presented on poster boards, and interactive PowerPoint presentations the jury would be able to view during deliberations.
All those attempts at persuading the jury failed, as no defendant who went to trial was convicted on any charge. Some jurors commented after delivering their verdicts that the prosecutors had not been able to prove beyond a reasonable doubt that the individuals they alleged were the defendants were in fact the people sitting in front of the jury. Also telling was that the surreptitiously recorded video that the prosecution was relying on to establish their conspiracy charge did not convince jurors that there was anything more than political organizing going on.

This video is a crucial part of the state’s case crumbling. The video was recorded by one of several Project Veritas undercover operatives who had been infiltrating Disrupt J20 and other anti-inauguration protest planning meetings to discredit and expose organizers. Project Veritas is known for these operations and much discredited for their unethical and often outrageous pursuits of their far right political agenda.

Kerkhoff repeatedly represented to the court and the defendants that this video was being shown in its entirety and it was the only one MPD had received. Pemberton testified that the video had not been doctored, although under cross examination during the first trial, he admitted that he had combined three files to play it as one continuous video and had also edited out the undercover operative when he was visible in a mirror. But that was it.

The prosecution maintained this story until pre-trial motions for upcoming trial blocks were heard in one courtroom while the May 14 trial was underway in another. These motions forced the prosecutors to admit facts that exposed their hiding of evidence, in violation of their Brady obligations. Turns out, they had also edited out a conversation that the undercover operative had with an unwitting activist about how the “leaders” didn’t know anything about the “upper echelon” stuff, which seemed to mean violence or property destruction. This statement clearly was not advantageous to the state’s claim that the video established the conspiracy to riot and commit property destruction.

What’s more, the prosecutor had to admit that they had an additional 69 recordings from Project Veritas that they had not shared with the defense in a timely manner (including before or during the first or second trials).

The judge was furious. He dismissed charges against a handful of defendants and ruled that the prosecution could no longer pursue the conspiracy charges. Apparently in an effort to appease the judge, the prosecutors also dropped some charges on their own. Yet they still proceeded to pursue the charges against 39 defendants until their motion to dismiss changed their tune from bombastic melodrama to trying to slink away into the shadows. There has been some speculation that this and other filings from the prosecution are designed to protect Kerkhoff from serious disciplinary actions given she was caught hiding evidence.

J20 defendants and supporters have called this result a victory, and rightly so. Not often are prosecutors caught hiding evidence (particularly while cases are happening instead of years or decades later), and rarely are they forced to abandon cases after threatening to send around 200 people to prison for more than 60 years each. Yet there are many legal fees to be paid and untold trauma for defendants to struggle through as they begin to put this ordeal behind them.
While we all continue with our struggles, keep up to date on how to remain in solidarity with the (former!) J20 defendants at defendj20resistance.org or on Twitter and Instagram at @defendj20. ■