By Curtis Cooper, Co-Facilitator of the Maryland NLG

Prior to this year, the last time the Maryland NLG Chapter hosted the Mid-Atlantic Regional Conference was in April 2015. At that moment, 25-year-old Freddie Carlos Gray, Jr. lay in a coma, after being brutally apprehended and detained by Baltimore City Police (BPD). As protests and some unrest spread across the City following Freddie Gray’s death, amazing organizing efforts and legal activism emerged, including the revival of the NLG chapter at the University of Baltimore School of Law. Fittingly, the UB Law School hosted this year’s Mid-Atlantic Regional Conference, which featured a lineup of nine workshops, a keynote address, and a plenary session.

As anyone who has attended the #Law4thePeople Convention knows, hands-on activities like protests and tours are a welcome means for members to take political action into the streets. In this spirit, after an inspiring conference, a group of Guild members and friends filed onto a school bus for a tour of nearby West Baltimore to honor the legacy of Freddie Gray.

Our first stop was the intersection of Pennsylvania and North Avenues, where attorney Jason Downs described the largely peaceful protests at this location following Freddie Gray’s death. Jason, a highly successful trial lawyer and former DC Public Defender, represented Freddie Gray’s family in their legal claims against Baltimore City. He also represented Larry Lomax, a protestor pepper sprayed and dragged by his hair by police at this intersection during the Baltimore Uprising. In January of 2018, a jury in Baltimore City awarded $75,000 to Lomax for his injuries. 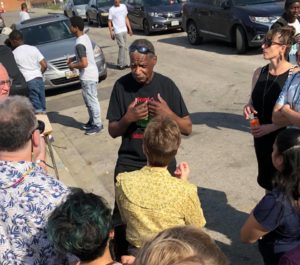 The next stop was the Tubman House, close to where Freddie Gray was violently apprehended by the police. We were greeted by Marshall “Eddie” Conway, President of the Tubman House, author, and producer for the Real News Network. Conway was active in Baltimore’s Black Panther Party, and was incarcerated for 43 years and 11 months before winning his release with assistance from Guild attorneys on March 4, 2014. He guided us through vacant lots which the Tubman House has converted into organic gardens. Here, through the generosity of conference attendees who earmarked registration payments, we made a financial donation to the Tubman House.

A short distance away we gathered at the burned-out site of the Hae-Tteuneun market, owned by Grace Lyo, which was set ablaze on the night of Freddie Gray’s funeral. Donggon Lyo, who watched with his mother as flames consumed the store, movingly reflected on the often close relationships of his mother with her customers, and why she as an immigrant chose to build her business in this location.

Our final stop was across the street from the Western District Police Station, where Freddie Gray was taken after his “rough ride” in the police van that caused his fatal injuries. The abusive treatment by police was hardly unusual, as documented in a 2016 report by the U.S. Department of Justice which led up to a consent decree with BPD.

Thanks to our welcoming presenters, we got a sense of the trials, tribulations, and triumphs which West Baltimore is facing—and what we can do to support the work of organizations on the ground like the Tubman House. At the same time, we tried to avoid the dynamic of being mostly white tourists gawking at sites in Freddie Gray’s narrative, without concern for the community.
In a fine Guild tradition, here’s to more events like this that build relationships with local communities in ways that build bridges and break down barriers. ■