One of my first events as the Historian of our NLG student chapter at the University of D.C. David A Clarke School of Law was the renaming of the chapter in honor of our celebrated Professor and longtime Guild member, John C. Brittain.

Professor Brittain is my Torts professor, and as is usually the case with 1Ls, it is hard to imagine the person at the front of the room as a human in context. Intermixed with joint-tortfeasors and Palsgraf, he occasionally tells a story that hints at something from his CV. Nonchalantly, he may mention that time he defied a racist judge in the south to ensure the rights of his client, or another time when he helped shape the law over a drink at a bar. The more students experience the teachings of Professor Brittain, the more we are in awe of the life he has lead, and the work he continues to do. 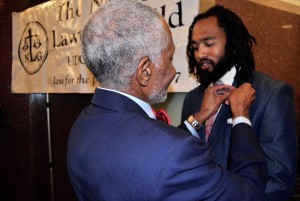 his students frequently. He is proud of his connection to the Guild, and in turn, inspires students to continue the Guild’s legacy. So it was not a difficult decision when deciding who to name the chapter after, and without much conversation the board landed on Professor Brittain.

At our celebration, we were joined by his longtime friends and fellow Guild members, featuring remarks by UDC Law Dean Shelley Broderick, Steve Saltzman and Jeanne Mirer (all the way from France). Professor Brittain, ever focused on ensuring the work of the Guild moves forward, flipped the script on us, and passed the torch to the next generation of Guild members by pinning his Guild pin on our UDC Chapter President, Naji Mujahid.

We can only hope to ever have a career with as much impact, and as meaningful as, Professor Brittain’s. ■