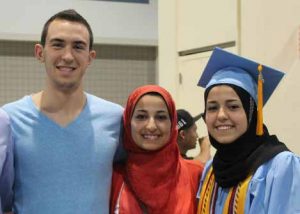 On February 10, three Muslim students, Razan Abu-Salha (19), Yusor Abu-Salha (21), and Deah Barakat (23), were tragically murdered, shot at point-blank range in their home by their neighbor, Craig Stephen Hicks, a 46-year-old white man. Describing himself as an “anti-theist” on social media, Hicks had previously harassed Yusor and Deah while wearing a gun on his waist. The police initially branded the murders as the unfortunate outcome of a dispute over parking—as Hicks had described—rather than a hate crime. Many in the Muslim community have pointed out the hypocrisy and double standards inherent in this. Would the characterization of this crime have been the same if the victims had been Caucasian and the assailants Muslim or African-American?

The mainstream media initially ignored the murders until the story exploded on Twitter. Once they did, the story was overwhelmingly framed in the way it had been by the police— as a dispute between neighbors rather than a terrorist act targeting three Muslim-Americans because of their religion—leading Muslim communities to believe that their lives are valued less than others in this country.

This, of course, is symptomatic of the larger patterns of Islamophobia and governmental targeting of Arab and Muslim communities which provide the necessary backdrop for, and legitimize, hate crimes. From religious discrimination to systematic surveillance to FBI harassment, Muslim- Americans have been under attack, and more intensively so since 9/11.

The case of the Chapel Hill murders hit particularly close to home for me as I lived in North Carolina, working with Muslim-American and Arab-American communities from 2004 to 2007. When I first got to the state after law school, I noticed a large Muslim-American population and assumed that there were projects or legal organizations addressing the needs of the community, especially in light of the post- 9/11 crackdown. But no one could point me to anything. So I decided to start one. I approached the ACLU of North Carolina with an idea for a project to help increase awareness among Muslim-American and Arab-American communities about their rights. I also aimed to create a network of attorneys to help represent individuals approached by the FBI for “voluntary” interviews and other governmental intrusions.

I got the go-ahead. In the course of doing this work, I visited many mosques and community centers and interacted with Muslim-Americans from across the state. I learned about systematic civil liberties violations and witnessed a community living under a state of siege. I interacted with many NLG attorneys who were zealousl

y defending their Muslim-American clients against the powerful machinery of the US government.

After all these years, it is extremely upsetting to see that it is still open season on Muslims in North Carolina—and across the country.

The NLG will continue our work in exposing and battling Islamophobia in all its forms. Our “Know Your Rights” booklets are available in five languages including Arabic, Bengali and Urdu, and have been disseminated widely. Our members around the country continue to defend Muslim- American and Arab-American communities under attack. We’ve also signed on to a letter initiated by Muslim Advocates to Attorney General Eric Holder demanding the government initiate a federal investigation into the Chapel Hill murders. We shall not retreat until Muslim-Americans in this country are afforded their human dignity and human rights. ■