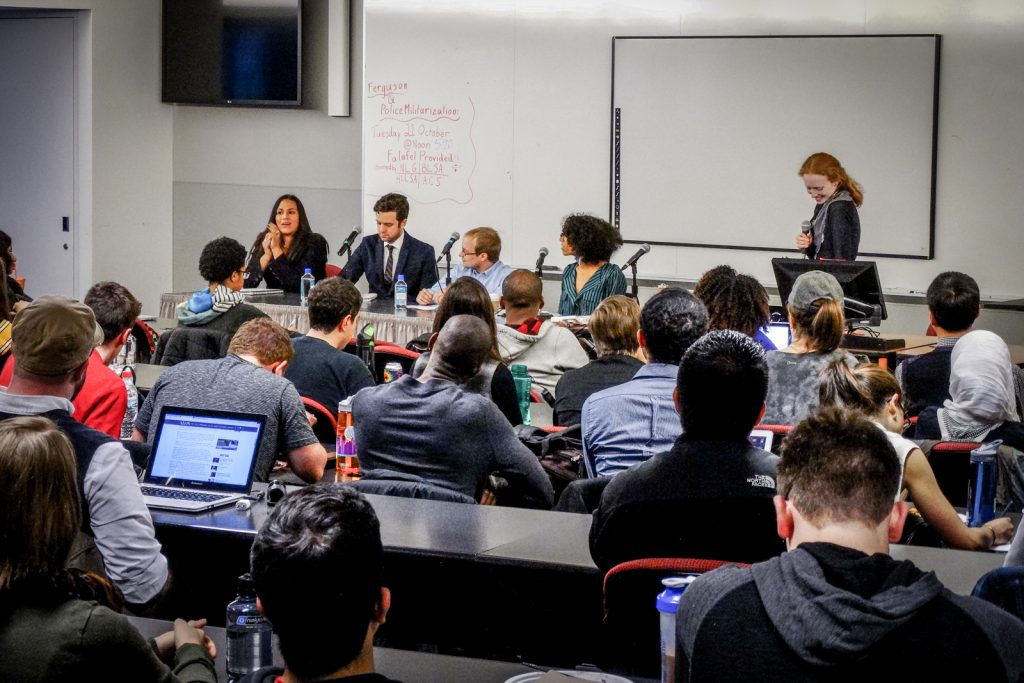 On Tuesday, October 21, the Chicago-Kent College of Law NLG chapter hosted a panel on “Ferguson & Police Militarization.” Speakers on the panel included Sheila Bedi, a professor at the Northwestern School of Law with a research focus on mass imprisonment; David Warnock, a Chicago-Kent student who spoke about police militarization from a veteran’s perspective; Max Suchan, DePaul student who was arrested in Ferguson while volunteering as a Legal Observer; and Page May, a representative speaker from the grassroots organization We Charge Genocide. The event was co-sponsored by Chicago-Kent’s Black Law Students Association (BLSA), Hispanic Latino Law Student Association (HLLSA), and American Constitution Society (ACS).

The panelists stressed that the events in Ferguson were not unique to Ferguson. In other cities, including Chicago, police are given military grade weapons that are used against protestors and to police communities of color. They believed that due to the national media attention on the killing of Michael Brown, it is a unique moment to focus the nation’s attention on the killing of people of color by police and make some headway into holding police accountable for their actions. The panelists also encouraged the audience to not buy into the “politics of respectability”—the media’s portrayal as some victims of police violence as more tragic than others based on whether the victim was a “good student” or looked particularly “respectable” in pictures. They emphasized, rather, that all black and brown lives matter and that we should be working to find justice for every person killed by police.

The event drew a huge crowd, over 100 students sitting, and some standing, listening to the panel with rapt attention. We’re excited that this event brought so much awareness to the student body about NLG and the issues surrounding police militarization in this country.