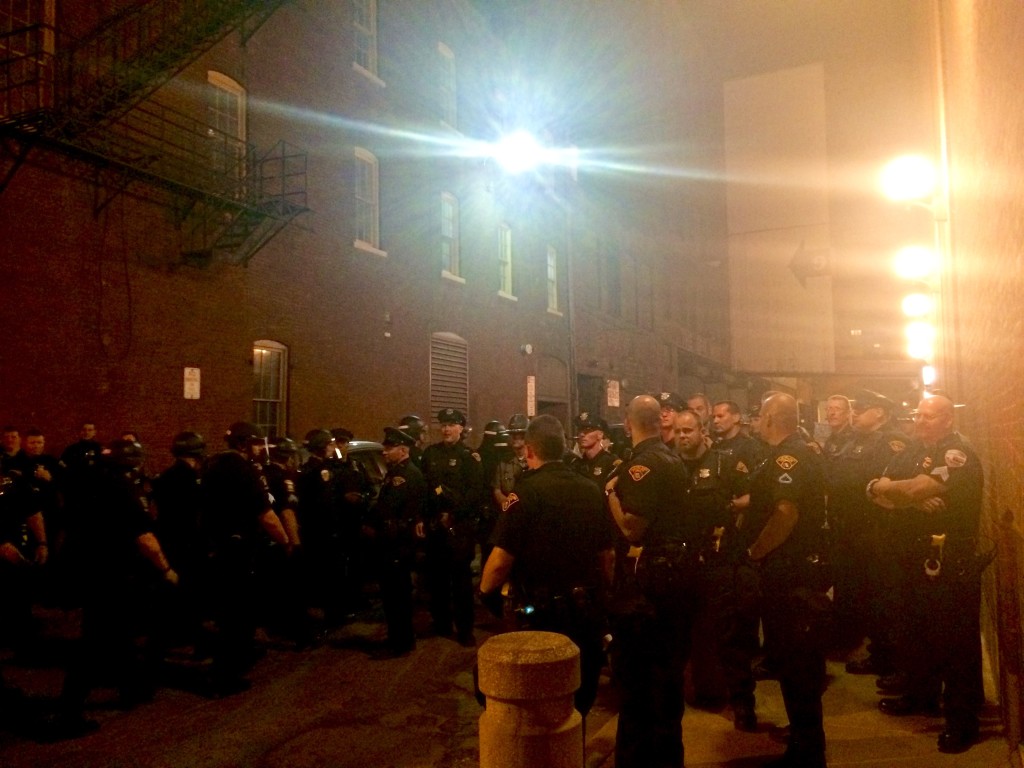 On May 23rd, 71 protesters, plus two Legal Observers, were arrested during demonstrations following the acquittal of Michael Brelo, a Cleveland police officer charged in connection with the deaths of Timothy Russell and Malissa Williams in November 2012. Protesters were pushed into and trapped in a small alley, given no opportunity to leave, and then arrested for failure to disperse and jailed for two nights. Fifty-three protestors were charged with misdemeanor offenses and four additional protestors were charged with felony offenses

In anticipation of demonstrations, the City had previously developed a “rapid response strategy” in order to protect “peaceful protesters” which tasked volunteer marshals with identifying “agitators” and reporting rumors of unrest or disorder to the Cleveland Division of Police (CDP). The City’s rapid response program also chose to utilize lime-green badges to identify their marshals, causing potential confusion with the Guild’s Legal Observer identifiers. Shortly after the program’s announcement, the Ohio NLG issued a press release urging the City, the CDP, and the marshals to respect the rights of all activists and differentiating Guild Legal Observers and their lime-green hats and armbands from the City’s rapid response teams.

Throughout the May 23rd demonstrations, the Ohio NLG, with assistance from the Black Movement Law Project and Shanna Merola of the Detroit and Michigan NLG, coordinated multiple teams of Legal Observers throughout the city. The Ohio NLG and the Black Movement Law Project also coordinated jail support while protesters were in custody. The Ohio NLG worked with the Cleveland NAACP to recruit pro bono defense attorneys to appear at the arrestees’ arraignments.

After the arrestees were released, the Ohio NLG and the Black Movement Law Project met with Cleveland city officials to raise concerns about the lack of speedy processing for the arrestees, discuss the arrest of NLG Legal Observers during the demonstrations, and reiterate the potential for confusion resulting from the lime-green rapid response team badges. The Ohio NLG has also launched the CLE Movement Law website with Cleveland Action as a resource for the arrestees and future demonstrators and created and distributed hot cards to inform demonstrators of their legal rights during a protest.

Attorneys recruited by the Ohio NLG and Cleveland NAACP have continued to provide pro bono representation for arrestees through the resolution of their cases. At present, all misdemeanor cases have been either nulled by the prosecutor, dismissed by the Court, or resolved through plea deals or participation in first-time offender programs. Three of the felony cases are in the process of being resolved while the fourth is set for trial. An ACLU of Ohio suit against the city has also recently begun settlement discussions.

The Ohio NLG is hosting the Mideast (“Rustbelt”) Regional Conference at Case Western Reserve University School of Law on March 19-21, 2016. A heavy emphasis will be placed on building local capacity to provide legal support to RNC demonstrators on July 18-21, 2016.