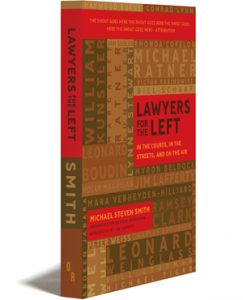 Lawyers for the Left by Michael Steven Smith is available from OR Books.

This interview was originally published in the Indypendent, May 24, under the title “Who You Going To Call?: Movement Lawyers Testify in Michael Steven Smith’s New Book”

Activists know that by disobeying the law, they bring the spotlight to their cause, gum up the legal machine and show grit to their comrades. But what happens when a pernicious government decides to prosecute them beyond a simple slap on the wrist… or to illegally tap their phones? That’s where movement lawyers come in.

For over 40 years, Michael Steven Smith has been representing left-wing causes in the courtroom, from defending political prisoners in 1960s Detroit to bringing charges against shipping companies on behalf of indigent sailors to taking cases on behalf of the poor in Jamaica, Queens.

The Indypendent spoke with Smith about his new book, Lawyers for the Left, in which he takes a step back to view movement lawyers from the perspective of a historian. This conversation has been lightly edited for concision and clarity.

This is my sixth book. I have a radio show on WBAI, which I started with Michael Ratner and Heidi Boghosian in 2004. We are on 119 other stations nationwide and on the internet at lawanddisorder.org.

One of your longer profiles is of Bill Schaap and the work of Covert Action Quarterly, which exposed CIA agents and the crimes of American spies overseas. What does the magazine, revived last year as CovertAction, have to say about our current surveillance state?
Covert Action Quarterly was started by Bill Schaap, Ellen Ray and Louis Wolf to expose the crimes of the CIA. They were ultimately shut down by a libel lawsuit from the Reagan administration. Subsequently, Congress passed the Identity Agents Act, which criminalized the exposure of CIA agents. What Schaap and the others did was not illegal. They used public sources to expose who CIA agents were — mostly out of American embassies abroad — because they were facilitating the overthrow of democratic governments.

This applies to Julian Assange too, because he is a truth-teller in the modern age. He published what Chelsea Manning gave him from the Iraq War logs. Manning had been to several establishment outlets who refused to publish it, so she then went to Assange.

As a socialist lawyer, how do you define the law?
Liberals view law as a set of rules to resolve differences between people or between people and the government, but William Kunstler said that the law is in fundamental essence nothing but a method of control determined by a socio-economic system set on perpetuating itself by all means necessary for as long as possible.

That’s an accurate view of the law with one exception: The powers that be cannot rule by repression alone. It’s untidy and expensive. You can’t have six cops on every corner, so they rule by certain mythologies, like all men are created equal, and they hold out certain promises, like you can make change if you abide by the law, so that people stay within certain bounds and govern themselves.

All men are created equal is a myth. You are not equal to Donald Trump, Jr. Equal opportunity is a myth. Real wages are declining. Most people live from hand to mouth. There’s no free education to speak of, no health care, no housing, no right to a job. That would be changed by a massive social movement and opposed by the powers that be. History comes from that struggle between classes.

There’s a lot of anxiety about the right-wing majority on the Supreme Court these days. How do we exert social pressure on the justices?
The Supreme Court needs legitimacy. It needs people to believe that they’ll be fair and just. This current Supreme Court is way behind popular sentiment. They’re poised to outlaw the right to abortion, which was won by struggle 50 years ago. I think what might restrain them is their vast unpopularity.

What are conditions like for social-movement lawyers these days?
The three most crucial causes we face are the threat of nuclear war, the decline of democracy and rule of law, and the threat of ecocide and vast environmental catastrophe due to human-caused climate change.

The movement today has to be very wary. The government is infiltrating mosques, they’re labeling Black Lives Matter an extremist organization and attempting to prevent them from exposing police brutality and murder. As the struggle heats up, and it is heating up, I think we’ll see more secret police attempts to subvert socialist, black nationalist and Muslim organizations.

From your experience dealing with government surveillance and subversion of the left, what advice would you give radical groups like Black Lives Matter or the Democratic Socialists of America?
Be very wary of anyone who advocates or urges doing anything illegal. Following them is leading with your chin and it allows the government to put the onus of violence on us rather than on themselves, where it belongs. I’d be wary of anyone who is extremely dogmatic and sectarian, who is unkind and un-comradely to others in the organization. I’d be very wary of stories that are spread. I’d check out their sources. Make sure you’re dealing with the truth and not just rumor mongering. And I’d deal in utmost transparency.

Who stood out most of all the lawyers you spoke with in Lawyers For the Left?
The people I talk about in my book are extraordinary, courageous figures like William Kunstler and Leonard Boudin. All 23 lawyers in the book are creative, bold, inventive, and courageous and had an impact.

Rhonda Copeland, working for the Center for Constitutional Rights, won the famous Falartaga case, which allowed for international torturers to be sued by people that live in the United States. Lynne Stewart’s defense of the “blind sheik,” Abdul Rahman, was a demonstration of how everyone, even Dracula, is entitled to a lawyer.

Any advice to young activist lawyers?
My advice is to read Lawyers for the Left, and you’ll get inspiration about what your predecessors have done. The motto of the National Lawyers Guild is that justice is a constant struggle and you’ll have to pave your own way out there. You’ll derive some courage and sustenance from knowing that there are people that have preceded you.

We’re living through extraordinarily dire times. Donald Trump is a malignant symptom of the failure of capitalism to provide for a good way of life. There’s the threat of climate change, nuclear catastrophe and the crushing of democracy. So I would advise activists or law students that that’s what you should devote your time to. ■