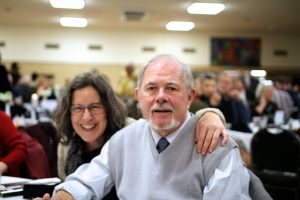 On February 11, 2018 the Detroit & Michigan Chapter of the NLG hosted its 81st Anniversary Dinner at Local 600, United Auto Workers, in Dearborn, MI. More than 500 people braved freezing temperatures, snow and sleet to attend.

Keynote Speaker Noam Chomsky gave an enlightening talk to attendees. Chomsky is well-known as the “Father of Modern Linguistics” but more so for his life-long fight for social justice. During the keynote, Professor Chomsky inspired those present to continue to struggle for social justice and to “speak truth to power.”

The Chapter honored Cynthia Heenan and Hugh “Buck” Davis, founders of Constitutional Litigation Associates of Detroit. Cynthia co-chairs the Detroit Citizen’s Resistance Committee and is on the Steering Committee of the NLG Mass Defense Committee. She and Buck are also founders of the Guild’s National Police Accountability Project. Buck has been involved in landmark cases since before graduating from law school, beginning with U.S. v. U.S. District Court ex rel. Sinclair. Buck has been a member of the Guild for 47 years. Cynthia joined him right out of law school in 1995. 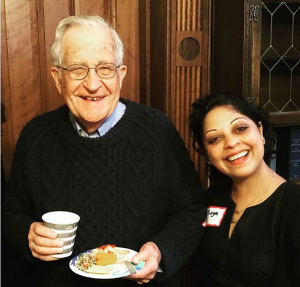 Cynthia and Buck blur the line between work and play, combining business trips with visits to family and destinations. Their yin and yang keeps things balanced personally and professionally. They strive to strike a balance between fighting for what’s right and keeping the lights on for themselves and the next generation.

The Unsung Hero Award celebrated “The Raiz Up”, a Xicano/Indigenous hip hop group in Southwest Detroit that was started by Antonio Rafael and Lisa Nemiki/Gokwe Brunk for “decolonial edu-tainment.” Antonio is a Xicano artist, organizer, and musician, active in the right to water movement. Lisa is an Ojibwe mother and activist from the Lac Vieux Desert in the upper peninsula. Honored with the group were Raymond Soufy Elwart and America Del Real. Raymond and America are well-known activists, artists and musicians in Detroit, and in America’s case, a dancer. She founded Detroit’s Joyas de Mexico dance group in 2010.

Outstanding Law Student Honorees were Madeline Sinkovich & Marie Reimers. Both 3Ls at Wayne State University Law School, and both feminists, they were drawn to the Guild at law school orientation.

Radicalized studying police practices at Ferguson, Madeline is a frequent legal observer. She works with the Keith Center for Civil Rights and organizes panel discussions on radical labor law. She wants to fight police misconduct and help grassroots community organizations. She is from Novi, MI.
Marie became a radical feminist as a teenager. She’s a frequent legal observer, and volunteered in Cleveland for the Republican National Convention and in Washington, DC for J20. She works with the Michigan Children’s Law Center and the Detroit Radical Childcare Collective. Marie is from Saginaw, MI. She wants to work with legal aid in anti-poverty work. According to Marie, “Poverty is man-made.”

The anniversary dinner is an annual event of the Detroit & Michigan Chapter. Guild members and friends from other chapters are more than welcome. Upcoming anniversary dinners will appear at www.michigannlg.org. ■

Featured image: A view of the sold out dinner, with event space generously donated by UAW Local 600. (Photo: Shanna Merola)