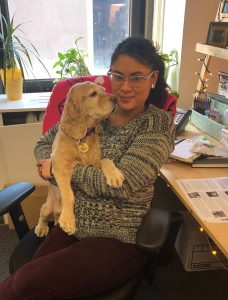 Kimmie David – Office Manager, NLG National Office (with assistant, Augustus Floof!)
Kimmie David began her professional career as a collective member and co-owner at Bluestockings, a radical, feminist bookstore and event space in the Lower East Side of Manhattan. She has since made magic out of thin air (and a lot of coffee) at many bookstores and restaurants, and at such varied places as Maker Faire, RightRides for Women’s Safety, and the League of Extraordinary Penpals.

Kimmie has a soft spot for cocker spaniels, letter writing, and orange creamsicles. A lifelong New Yorker, she is a graduate of the Macaulay Honors College at CUNY Hunter College, and holds a B.A. in Creative Writing and Women, Gender, and Sexuality Studies. 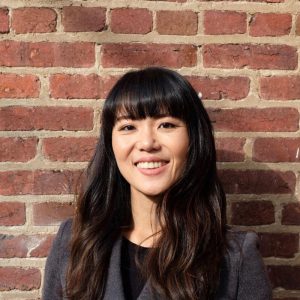 Jay was also a founding member of O4O, a city-wide organizing effort to actualize the human right to housing through direct action. With O4O and Common Law, she organized several large-scale actions. Jay also was an active member of Nodutdol, an organization of progressive Korean Americans working to build solidarity with other people of color.

Prior to joining NLGSF, Jay was a Supervising Attorney and Clinical Instructor at DC Law Students in Court. Jay received her B.A. from the University of Minnesota and is a proud alum of CUNY School of Law.