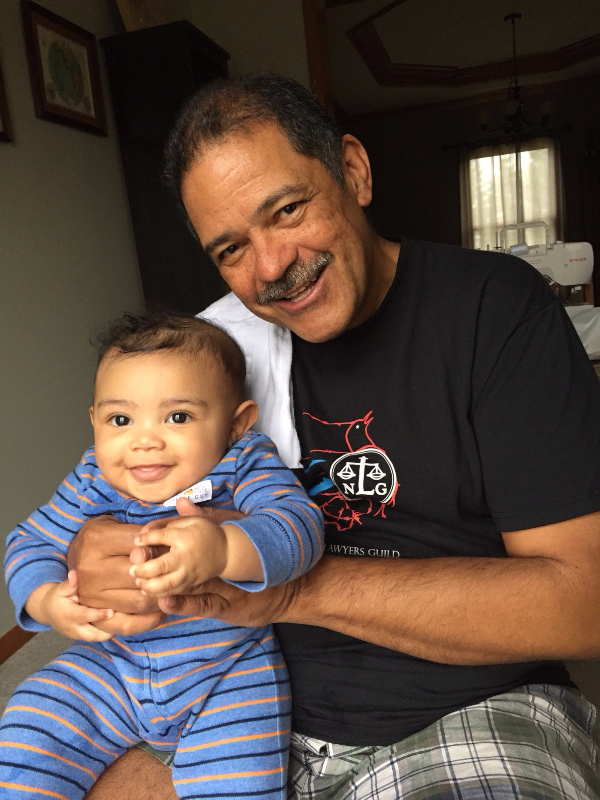 Charlie (sporting a t-shirt from the 2013 #Law4thePeople Convnetion in Puerto Rico) with grandchild Gabriel Tatmon-Hey. Photo courtesy of Linda Colon.

Extraordinary tributes were held at San Juan’s Colegio de Abogados (the Puerto Rico Bar Association) in February and at NYU School of Law in April, in honor of Charles Hey Maestre, a leading independentista lawyer and NLG leader. Charlie died in February of cancer.

As a staff attorney and administrator of the Instituto Puerto Riqueno de Dereches Civiles from 1983-89, Charlie led the transition of the NLG’s Puerto Rico Legal Project from a solidarity program with the island’s Independence movement, into Puerto Rico’s first public interest law firm led by the Puerto Rican community. The Instituto gained immediate visibility through its litigation of a case arising from the murder of the son of a noted Independentista poet at the hands of the Puerto Rico police’s notorious Death Squad at Cerro Maravilla. The cover-up the case exposed became a national scandal in Puerto Rico, leading to Watergate-style hearings in the Puerto Rican Senate, and the electoral defeat of the Governor.

Charlie later became law partners with Judith Berkan, who had led the NLG Puerto Rico Legal Project’s representation of the Vieques fishermen. He later became the Executive Director of Servicios Legales, Puerto Rico’s legal program for the poor, where 45% of Puerto Rico’s population qualify for its services. Tributes in both San Juan and New York were stirring. Judy Berkan told of scenes at the Colegio de Abogados, where adversaries who never find agreement, paid tribute to Charlie. In New York, Iris Morales, a former Young Lord who recruited Charlie to attend NYU Law School, recounted how Charlie joined the early efforts to diversify the student body. U.S. Supreme Court Justice Sonia Sotomayor told the New York audience how as an undergraduate she became Charlie’s mentor, and that Charlie brought about her introduction to her mentor, Jose Cabranas, when Charlie visited her law school to interview Cabranas for his senior undergraduate thesis focusing on the status of Puerto Rico. Justice Sotomayor and other speakers sounded the common theme that when he graduated law school, with many avenues open to him, Charlie kept to the vision he had told to Iris Morales when she recruited him to NYU: he returned to Puerto Rico to serve his community. Upon graduation from NYU in 1980 he became a Reginald Heber Smith Community Law Fellow at Servicios Legales in San Juan from 1980-83. He then served as a staff attorney and administrator at the Instituto from 1983- 89. Ellen Chapnick, former president of the Center for Constitutional Rights who worked at the NLG Project in San Juan for a year, recounted Charlie’s work on CCR’s board and leadership at the New World Foundation as a board member and its chair. Charlie devoted his life to advancing justice for the poor and oppressed of the island.

The NLG’s Puerto Rico Subcommittee is so pleased that hundreds of contemporary Guild members got to meet Charlie when he was one of the organizers and a host of the 2013 NLG Convention in San Juan. ¡CHARLIE PRESENTE!