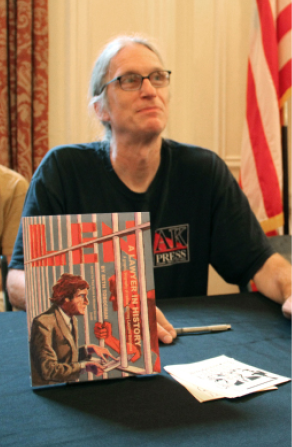 Seth Tobocman signs copies of LEN at the NLG’s 2016 #Law4thePeople Convention in NYC.

I never cared for graphic books—then I read Seth Tobocman’s fine graphic biography of the great American lawyer, Leonard Weinglass. In the future I certainly won’t dismiss graphic books before at least taking a peek.

A piece of advice: before jumping into the book’s graphics, be sure to read Michael Steven Smith’s brilliant, moving and all-inclusive introduction to Weinglass’ life and work. Smith was a close and dear friend of Weinglass, and reading his introduction prepares the reader to better understand all that follows.

A Lawyer in History is less than 200 pages, and all but a few are filled with illustrations. Tobocman didn’t just rely on his considerable artistic skills to tell the story; he spoke with those who knew Weinglass well and studied the cases and political times of his heroic legal practice. As a result, Tobocman’s highly expressive drawings and writing successfully capture the essence of who Weinglass was as a man—why he became so radical, what motivated him to take on the cases he did, and what the political movements he represented were all about. Tobocman includes excerpts of conversations to capture the political context and insight into Weinglass’ strategy as he tackled one seemingly impossible case after another.

Right from the start we learn, through Tobocman’s straightforward storytelling, how the stock market crash of the Great Depression drove his grandfather to suicide and the effect this had on young Leonard; how his over-worked father in the family drug store left Leonard without his attention much of the time; how Weinglass refused to change his Jewish name in order to get into law school (but got in anyway). And how after he graduated and knowing he did not want a soldier’s life, nevertheless signed up as a military lawyer to avoid the draft; and how hard he fought the court martial of a Black soldier despite the disapproval of his commanding officer.

His work as a military lawyer foreshadowed how he would view the practice of law once he was back in civilian life and, finally finished with an unsatisfying straight law job, found his way back to what he was passionate about: defending those fighting for radical social and economic justice, and against governmental political repression. 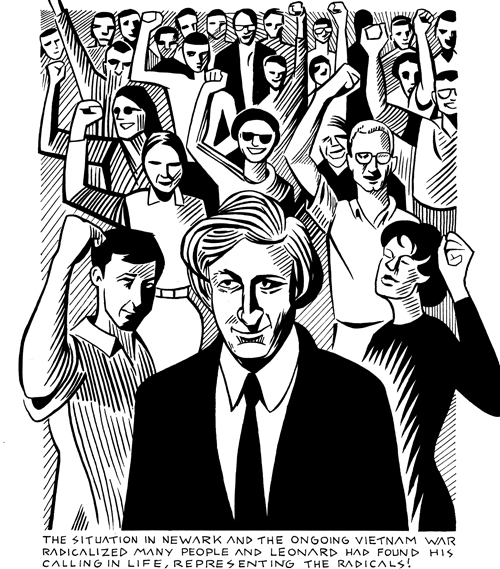 All of the major beats of Leonard Weinglass’ life and legal work are presented here, wisely, truthfully, and movingly, which is no small feat. His clients and cases read like a who’s-who of the radical movement for social and economic justice in our lifetime.

In the late ‘60s and early ‘70s, Weinglass was all that stood between people caught up in the racism-fueled Newark uprisings and long, unjust jail sentences. He was an attorney in the iconic case of the Chicago 7, who were arrested in connection with the brutal police assault on thousands of people near the 1968 Democratic National Convention. The coverage of that case in A Lawyer in History is alone worth the price of the book, featuring some of Tobocman’s best drawings and writings. The telling of how Weinglass bravely stood up for his clients in that case, how he fought back against an over-the-top, prejudiced judge and, as a result of an historically brilliant appeal, finally freed the Chicago 7, is the story of one of the great legal battles and victories in American jurisprudence.

There is so much more in this grand biography. The story and graphics detailing the passage of the Patriot Act following the attacks of 9/11 is adroitly and colorfully handled. Some of the most haunting and convincing commentary concerns Weinglass’ defense of Daniel Ellsberg following his release of the Pentagon Papers, which bolstered the steadily growing anti-Vietnam War movement. There’s more to these stories than one book can relate, but if this is all you ever read about the famous cases described in the book, you will have learned more than you could ever have imagined about this period of U.S. history, and about the life and legal career of Leonard Weinglass, one of America’s greatest peoples’ lawyers. ■