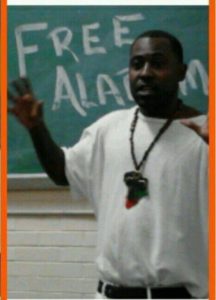 With strength and optimism, I greet the Comrades and salute the Freedom Fighters!
It has been a long ride. We have come a long way, yet there is so much work we still must do. I pen this expression with those in mind, who have committed themselves to the process and dedicated the time to actually DO THE WORK.

In an article I wrote in January 2014—in conjunction with our formal introduction of the Free Alabama Movement ( FAM) to the world—I spoke of “a flicker becoming a flame” and the threat of that flame blazing into a wildfire for change. To be in balance with the Universal Order, myself and hundreds of men confined within the Alabama DOC decided to become the change we wanted to see. From 2014 throughout 2015 and 2016 we worked tirelessly, fanning that flicker through networking, mobilizing, organizing and educating. 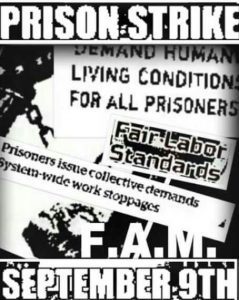 Two and a half years later, in a coordinated effort from Alabama to Ohio and all across the nation, that flicker turned into the National Prison Strike on the 45th anniversary of the Attica Rebellion.
Our Unity, Our Message, Our Methods, Our Execution shook the economical underpinnings and exposed the continued inhumanities of America’s dirty little secret: SLAVERY as a matter of law—the “Peculiar Institution” draped in the clothes of the American Policing and Criminal Justice System.

But, as historical analysis reveals, all attacks against the Institution will be met with extreme repression. True to form, many Comrades across the country are enduring the brunt of the repression: Ra’Salute to Comrade Malik, Bro Rashid, Iman Hasan, Bro Anthony Robinson, Bro Bennu, and dozens of other Brothers and Sisters.

I can also be counted amongst that number, as many of my ordeals prior to and since the strike have been widely documented and publicized. To my extreme benefit, in the weeks leading up to the National Prison Strikes, I received a special visit from the law firm of Gespass & Johnson, representatives of the National Lawyers Guild.

Their timing was perfect, as due to extensive media coverage the Alabama DOC targeted me as the “leader” of the strikes in Alabama and sought to neutralize me. First, I was Emergency Transferred from Holman to Kilby under investigation, then to Limestones Behavior Modification Unit, and eventually here to Donaldson Disciplinary Unit. They came with the pain, but the NLG provided a real cushion.

Recently, they filed a Habeas Corpus challenging my treatment and indefinite solitary confinement status. Since that filing in January 2018, I have been moved from my “illegal” Disciplinary Segregation placement to the Administrative Segregation Unit, which corresponds with my classification status. Two days later, I was given six months’ worth of confiscated newspapers, periodicals, and other publications.

Based upon the move to Admin Seg, for the first time in over four years the Segregation Review Board is considering my release to General Population.

As should be evident by now, I acknowledge, respect, and appreciate the NLG for showing up on Day 1 and providing real legal assistance to the Brothers of the Free Alabama Movement. A special shout out to David, Kathy and Tiffanie.