Like much of the country, Portland, OR has seen a massive influx of resistance to the overt and undeniable fascism and white supremacy that President Trump has re-legitimized since the 2016 election. The state has responded with repressive tactics, but that has not quelled the myriad ways anti-fascists and other leftists organizing for collective liberation have responded. Beyond the Women’s March and other mobilizations where the state is apprised of tactics beforehand, recent anti-fascist organizing has built a broad analysis of state and vigilante violence, and devised necessarily confrontational responses.
Founded as a “white utopia,” and being a state that rejected slavery because it didn’t want Black people present at all, Oregon is a hotbed for white supremacist recruitment and organizing. The covert anti-Blackness prominent in white liberal Portland culture has been brought to the surface, emboldening white supremacists and white nationalists who were chased out of Portland by militant anti-racists in the 1990s.

As such, Portland has become the West Coast gathering site for groups duped by far-right ideologies. Most notable among those comprise Patriot Prayer (based just over the river in Vancouver, WA), and the Pacific Northwest Proud Boys.

Last spring Patriot Prayer held its first rally, which was met with anti-fascist counter-demonstrators. Notably, the Portland Police Bureau (PPB) commissioned a municipal bus to safely transport the far-right demonstrators back to their cars. Days later, May Day demonstrators couldn’t have hoped to be so lucky. Mid-march, the PPB cancelled the march’s permit, and immediately deployed “less-lethal” weapons indiscriminately on a march led by children, families, and disabled people.

As May came to a close, an open white supremacist who participated in the Patriot Prayer rally while wrapped in an American flag murdered two people and injured a third on the MAX train for defending two Black teenage girls he had been attacking with Islamophobic and racist slurs. This horrific incident set the tone for Patriot Prayer’s next event, where they rallied at a federal plaza in downtown Portland mere days later (and did not have their permit revoked, thanks to the ACLU of Oregon).

First-time demonstrators and seasoned anti-fascist protestors alike showed up to showcase their opposition to Patriot Prayer’s pro-Trump rally on June 4th, 2017. There were three separate counter-protests, but police faced the counter-demonstration populated by those in Black Bloc the entire time. Coincidentally, PPB and Oregon State Police—working together and in full riot gear that day—decided that the anti-fascist demonstration across the street had become violent, just before the Patriot Prayer demonstration was scheduled to end. They announced that the square in which the vast majority of the day’s counter-demonstrators were assembled was closed.

After a few announcements, they moved in, deploying flash bang grenades, pepper balls, rubber bullets, mace, and had physical confrontations with peaceful protestors to violently expel them from the park. As they funneled the confused group north, riot police kettled nearly 400 people, announcing they were being detained for the investigation of disorderly conduct. Police subsequently ordered them to disperse, but blocked off all egress. They eventually let most people go after photographing their IDs, but they did make arrests within and nearby the kettle. Of the 14 arrests that day, none of them were from the Patriot Prayer side, and it wasn’t because they were more peaceful.

Two arrestees, Kelly Baur and Jeremy (Remy) Ibarra, decided to fight the charges. As part of the Portland NLG’s mass defense work (called the “Protestor Support Project” locally), we appeared at their arraignments and explained their options, incorporating an analysis of the political implications involved, rather than solely the legal and personal ones. Baur stuck with her court-appointed attorney, and Ibarra switched his counsel—who’d been advising him to take a plea deal—to myself and another NLG member, Crystal Maloney. The two then held a press conference proclaiming they were declining their plea deals, because “fighting fascism is not a crime.”

After several months and a few trial setovers, both cases were prepared to go to trial. Baur’s charges were dropped, however, when her lawyer won a hearing requiring AP to turn over footage they have of the alleged incident that led to her arrest. That footage told a story that conflicted with officers’ police reports.

It had become clear that there was pressure from the DA’s office to win Ibarra’s trial, as the prosecutor became increasingly difficult as trial dates approached. She turned over an 11-officer-long witness list for this single-count misdemeanor trial, but attempted to exclude all our witnesses and all video evidence on the grounds of relevance. We spent two days in pre-trial motions, and fortunately had the judge side with us on most our motions in limine, though we lost the motion to exclude.

The prosecutor tried to paint our client as a violent “leader” of an organized group that had shown up to fight with cops. Her police witnesses described the Portland NLG’s jail support hotline number that was written on his arm as evidence that he showed up intending to get arrested.

In reality, our client was hardly politically active before the MAX murders. He went to the counter-protest that day alone, intending to go to work shortly thereafter. Instead, he was pushed out of the park by riot police and kettled a few blocks later. Panicked, he attempted to flee through a five-foot gap in the riot police line, but was pushed back and shot multiple times with pepper balls. Through our witnesses, including an NLG Legal Observer, we were able to present a case that told the truth, which made the DDA pull some desperate moves like making the jury leave the room to discuss a line of questioning I’d started during our LO’s direct examination. It took the jury a couple hours deliberation to return a unanimous verdict of not guilty.

That win, plus the lawsuits filed against the PPB for the kettle, have influenced the protest policing in Portland. Law enforcement was fairly hands-off during Patriot Prayer’s one-year anniversary of the June 4th rally, deploying significantly fewer crowd control weapons than the previous year. This approach also enabled more left-right skirmishes to occur on June 30th, when Patriot Prayer and the Proud Boys returned to march, where numerous clashes resulted in the bloodiest showdown I’ve seen and the most outwardly hostile treatment of our NLG legal observers in recent memory. 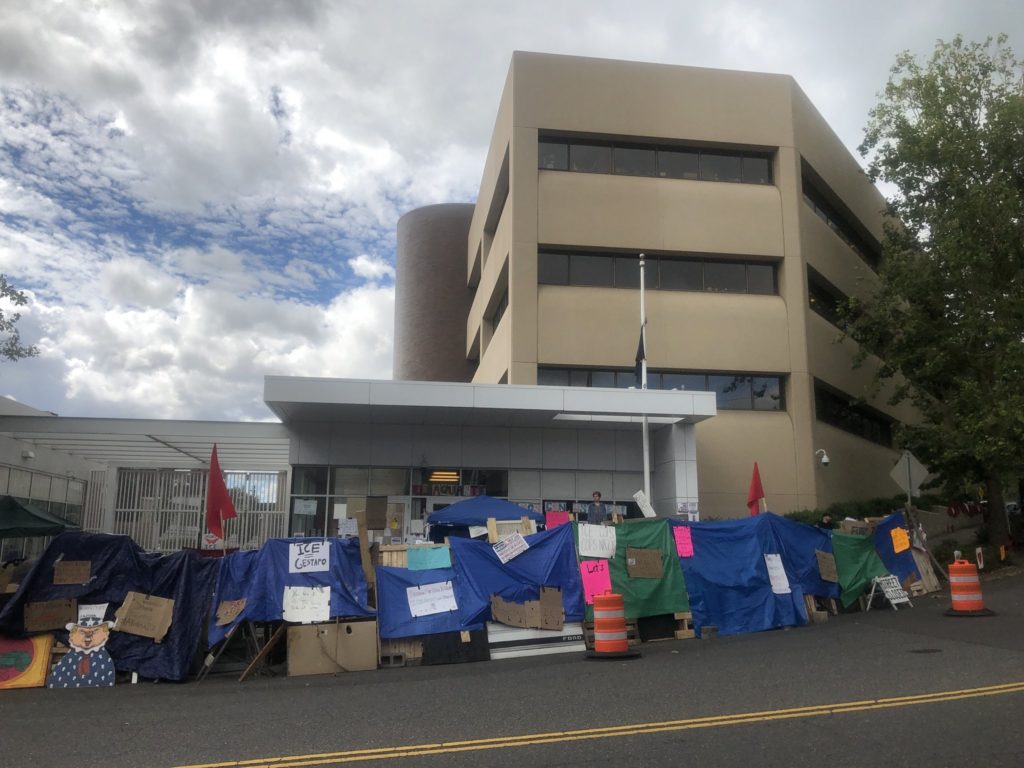 #OccupyICEPDX encampment in front of the Portland ICE building, June 25. The US flag was replaced with one that said “REFUGEES WELCOME.” (Photo: @itsMikeBivins/Twitter)

DHS officers mobilized to protect the federal plaza (and the fascist demonstrators there) had deployed significant levels of pepper balls and rubber bullets against the leftist demonstrators only. They appeared to be out for blood that day. This is likely because many of those officers had been “protecting” the Portland ICE facility for the preceding two weeks, and had been involved in clearing the building’s entranceways of camped out demonstrators two days before.

#OccupyICEPDX began as a response to the Trump administration’s “zero tolerance policy” which was tearing immigrant children from their parents at the U.S. border. The “occupation” of the facility started with a few tents the first night and swelled to over 100 after a few days, during which the facility became non-operational. Until riot police raided the tents and other structures obstructing the facility, Portland NLG provided 24/7 legal support, including our LOs and jail support hotline.

Following the raid, the tent city and prefigurative community that sprouted up on city property immediately adjacent to the facility has continued to flourish. Our hotline number is written on everyone’s arms throughout the camp, and our LOs show up when the police aggress. As of July 12, 24 arrests have been made in four different incidents. The Portland NLG continues to watch closely as DHS grows increasingly intolerant with the constant presence of protestors and their vision of abolishing ICE.■