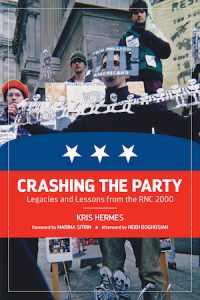 Drawing on first-hand experience and in-depth research, Former Mass Defense Coordinator and longtime Guild member Kris Hermes authored Crashing the Party: Legacies and Lessons from the RNC 2000 (PM Press, September 2015), which shows how the escalation of the National Security State was already being set in motion during the Republican National Convention protests (RNC) in 2000.  The book, with an Afterword by former NLG Executive Director Heidi Boghosian, also documents how dissidents confronted new forms of political repression by pushing legal boundaries and establishing new models of collective resistance. NLG Director of Communications Tasha Moro recently spoke with Hermes about the RNC 2000 and the role of legal activism in today’s movements:

TM: You attribute a large part of the unprecedented police response to the 2000 RNC protests, including mass arrests, to its National Special Security Event (NSSE) designation. What is an NSSE and how does it affect the right to dissent? Why is political dissent and protest so often conflated now with “terrorism?”

KH: The NSSE designation was created under Clinton in the late 1990s for large national events likely to draw political protests—such as the quadrennial RNCs and DNCs—establishes a multi-level law enforcement apparatus with the FBI and the U.S. Secret Service at the top. The NSSE security apparatus includes a hub of communications and intelligence gathering between local, state and federal law enforcement, much like today’s Fusion Center or its precursor, the FBI Joint Terrorism Task Force.
A playbook of aggressive anti-free speech policies and police tactics that commonly accompany NSSEs were first developed in Philadelphia during the RNC 2000 by then-Police Commissioner John Timoney. These include passage of anti-protest ordinances, defamation of activists in the media, denial of permits to demonstrate, preemptive raids on activist spaces, unlawful mass arrests, widespread and indiscriminate police violence, political interrogations, excessive bail, and malicious prosecution. Appallingly, municipal governments or hosts of political events will often purchase insurance to indemnify police and public officials against civil rights violations like those listed above.
Despite the fact that today’s policing model used against dissidents predates 9/11, the rationale for its use often stems from concerns over terrorism. But, the truth is there aren’t a lot of terrorist acts being committed on U.S. soil and, in order to bolster counterterrorism budgets and maintain a multi-billion-dollar industry, blurring the lines between terrorism and dissent offers greater opportunities for government to fund law enforcement equipment, weapons, and personnel.

TM: Innovative forms of legal support emerged from the RNC 2000, such as the defendant-led collective R2K Legal, of which you were a member. What role do you see legal collectives playing in the movement today?

KH: Because of the immense resources and oppressive nature of the state, once dissidents are caught up in the legal system it’s not really prudent to rely exclusively on criminal defense attorneys. Legal workers, and law collectives in particular, help establish an important link between the political movements the defendants are part of and the lawyers representing them.
Legal collectives have the unique opportunity to politicize criminal cases, including organizing the defendants to be strategic and bring politics into the courtroom, training defendants to represent themselves pro se, packing the courtroom with supporters, broadcasting calls to “drop the charges,” holding demonstrations, and seizing the media narrative.

TM: The 2016 conventions are coming up in July, with the DNC in Philadelphia and RNC in Cleveland. What kind of turnout do you expect to see from activists and law enforcement?

KH: I’m excited by the vitality of today’s movements and there are plenty of reasons to seize the opportunity to reach millions of people who will be paying attention to the conventions and the media spectacle that surrounds them.
I think we can expect more of what we’ve seen over the past 16 years in terms of an aggressive anti-free speech response by police and government. There are already signs of that in Cleveland with the passage of a restrictive protest ordinance and comments by Deputy Police Chief Wayne Drummond that Black Lives Matter protesters were kept “locked up” because the police “were worried they would get back on the street.”

TM: What was the role of the Guild in the RNC 2000 and how can groups like the NLG further support legal activist movements today?

KH: The Guild excels at monitoring police behavior through its Legal Observer (LO) program, as well as collecting evidence and testimony to defend protesters in court. In addition to training LOs and dispatching them to protest during the RNC 2000, Guild members also helped staff the legal office which included tracking arrestees and providing support during the jail process. Guild members were also part of the R2K Legal Collective and spent countless hours supporting activists through the trial process.
The Guild should continue to provide legal support by conducting Know Your Rights and LO trainings, gathering evidence, and defending protesters in the courtroom. And in fact, the NLG’s Mideast Regional Conference held in March focused heavily on strategizing around legal support during the 2016 RNC. We have an opportunity to work more closely with the movements it supports by strategizing ways to push the legal envelope and bring the political issues into the courtroom to help advance movement goals.

TM: What was your impetus for writing this book?

KH: Crashing the Party was a labor of love. Although it was heavily researched, I mainly wrote from my personal experience of supporting hundreds of RNC activists through a legal minefield for more than two years. This is part of our political and legal history, and must be told as powerful examples of how much we can and must push back against the legal system.

For more on the author, book, and upcoming events (many of them co-sponsored by the Guild), visit crashingthepartythebook.com.■