By the Puerto Rico Subcommittee of the NLG International Committee 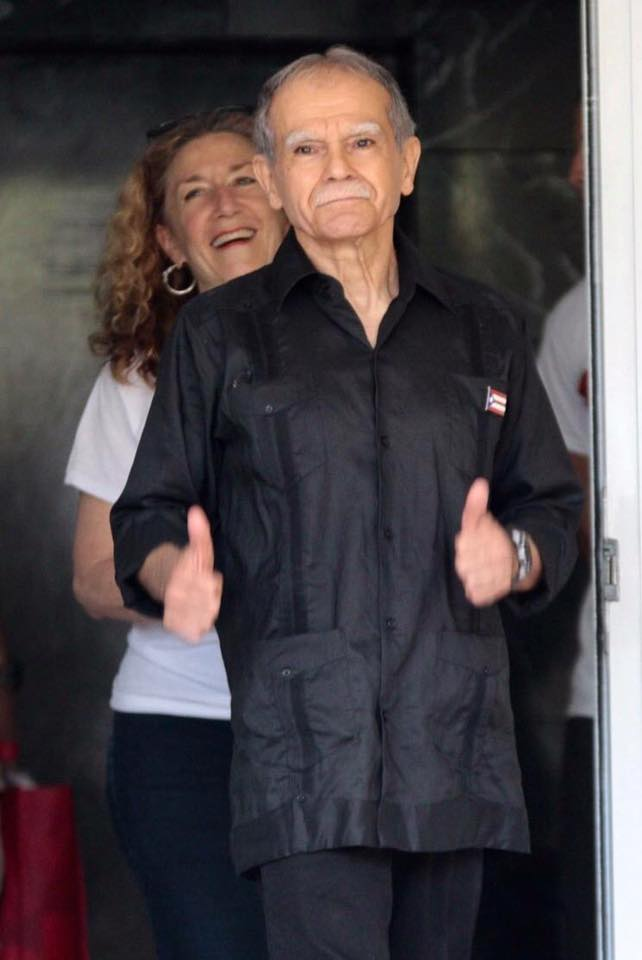 Oscar López Rivera being freed from house arrest on May 17. NLG member and his
attorney Jan Susler, smiles in the background. (Alina Luciano, Claridad)

On May 17, after almost 36 years in U.S. custody for his commitment to the independence and self-determination of Puerto Rico, Oscar López Rivera walked in to the waiting arms of the Puerto Rican people. Greeted with an early morning serenade by the chorus of the University of Puerto Rico, flowers, embraces, tears and media from all over the world, Oscar emerged with a message of unity, grateful for the consensus that resulted in the presidential commutation of his sentence.

Thousands of cheering people of all ages packed the plaza in San Juan to welcome him home. As the country’s finest musicians performed a concert in his honor, families passed their small children over and through the crowd, so they could be photographed with Oscar. His message was firm and loving: We must act together to save Puerto Rico from the U.S. imposed “junta” [Fiscal Control Board] which is ravaging our country; We must support the students whose strike at the University of Puerto Rico has galvanized the

movement to stop the draconian economic measures being imposed on the island and to focus on the necessity to decolonize our country.

Oscar is perhaps the most recognized Puerto Rican on the island. When he walks down the street, traffic stops, as people jump out of their cars, rush to his side to hug him, thank him, and take a selfie. When he eats in a restaurant, the wait staff, the chef, the patrons, all embrace him and take a selfie.

Each day of freedom has led him to another welcome event, from the Ecumenical Coalition where he was embraced by the Archbishop of San Juan and bishops from several denominations, to the 36 Women for Oscar who for four years had demonstrated the last Sunday of every month, to the striking UPR students, to the pro-statehood mayor of San Sebastián’s reception in his hometown, to the pro-commonwealth mayor of San Juan’s sponsorship of his art exhibit in the city’s art gallery.

His travels have taken him to Chicago’s Puerto Rican community, the Bay Area, and New York City, where he has been regaled by civic and community leaders, with cultural presentations, and with much love. His travels will take him to the 2017 NLG #Law4thePeople Convention in Washington, D.C. this August, where he will receive the Arthur Kinoy Award and speak on a panel about political prisoners. Come celebrate with the NLG’s Puerto Rico Subcommittee, which has for years held the Guild’s laboring oar advocating for his release and the noble cause which led to his imprisonment – the independence and self-determination of Puerto Rico, sponsoring resolutions, workshops and panels – even the NLG’s 2013 convention on the island! Join us in celebrating Oscar this summer: this is an opportunity you won’t want to miss! ■